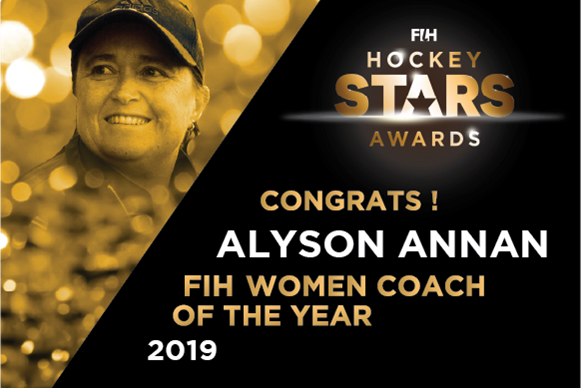 Alyson Annan has been named as the 2019 FIH Women’s Coach of the Year, the International Hockey Federation (FIH) can reveal.

This is the third time the Head Coach to the Netherlands women has won the Coach of the Year award (2017 and 2018) but arguably 2019 was Alyson Annan’s most successful year to date.

The Netherlands women’s team is seemingly unassailable under the Australian’s leadership and guidance. In the FIH Hockey Pro League, the team was magnificent. They lost just one game – to Australia – and Annan’s imaginative use of a large squad drew praise from coaches and players alike. The team won 15 of its 16 games, scoring 41 goals and conceding just 10.

The success continued with the EuroHockey Championships. While the Netherlands got off to a shaky start by their standards, drawing 1-1 with Belgium, by the knockout stages they were in unassailable form. They swept 2015 champions England aside in the semi-finals by an 8-0 score-line before beating Germany 2-0. The result meant they qualified for the Olympic Games Tokyo 2020, the one trophy, as Head Coach, that Annan is still chasing.

What makes Annan a superb coach is her willingness to learn and her ability to keep all her players motivated, whatever stage of their career they are at. Over the course of the six-month 2019 FIH Pro League campaign, young players such as Frederique Matla, Ginella Zerbo and Marijn Veen flourished and opponents must have groaned as they saw Annan’s squad rejuvenate itself with quality all over the field once again.

At the other end of the scale, Annan continues to get the best from the senior members of the squad. Eva de Goede (nominated for FIH Best Player award), Margot van Geffen and Lidewij Welten all continue to operate at the top of the game, despite more than 640 caps between them.

Explaining her philosophy and player management style, Annan says: ‘In any team you need a blend of players who will work hard and players who can create. My role is to put the right players on the pitch. And then, it is just about doing the simple things very, very well.”

Annan, who was voted FIH Player of the Year in 1998 and 2000, once explained that when she first took the role as Head Coach, she was not confident in her ability to communicate with her players effectively. To overcome that, she visited an equine therapist and learnt how to use body language to bolster her messages. As she enters an Olympic year, Annan will be looking at all ways to make sure that both her and her players are at the top of their game, because to the double Olympic gold medallist, coming second is not an option.

How did Alyson Annan learn that she had won the award? Watch the video here!

And: here’s a video interview of Alyson Annan after receiving the award.