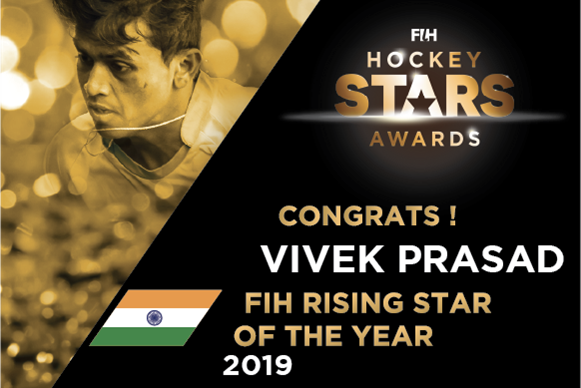 The 2019 FIH Men’s Rising Star of the Year has been revealed, with 19-year-old Vivek Prasad of India taking the prize. Midfielder Vivek won the accolade ahead of Argentina’s Maico Casella and Blake Govers of Australia, who finished second and third respectively.

When he took to the field in a Four Nations Invitational tournament in January 2018, Vivek Prasad was the second youngest player ever to represent the India national team, being just 17 at the time. Since then he has appeared for the senior side on nearly 60 occasions.

2019 was a busy year for India. They took silver at the Sultan Aslan Shah Cup, losing on shoot-out to Korea in the final. Vivek scored two goals in the course of that tournament.

The two most important events in the India men’s team calendar were the FIH Series Finals and the subsequent FIH Olympic Qualifiers. In the Series Finals, India beat off all opposition in the pool round to set up a meeting with South Africa in the final. They won 5-1 and Vivek made his way onto the scoresheet with a neatly taken goal. He was voted Best Young Player of the tournament. The result meant India were one step away from Olympic qualification.

Russia was the team standing in the team’s path but a 4-2 and 7-1 victory saw India seal their spot at the Olympic Games Tokyo 2020. Vivek didn’t score in those matches but was an integral part of Head Coach Graham Reid’s team.

With the Olympic Games Tokyo 2020 just a few months away, and an exciting FIH Hockey Pro League competition in the intervening six months, the stage is set for Vivek to shine.

How did Vivek Prasad learn that he had won the award? Watch the video here!

And here’s a video interview of Vivek Prasad after receiving the award.