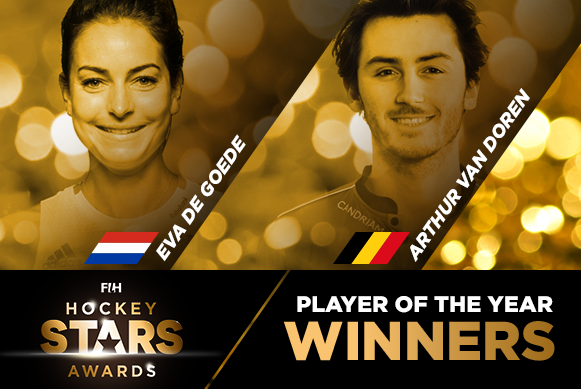 Lausanne, Switzerland: The Netherlands’ Eva de Goede and Arthur Van Doren of Belgium have been revealed as the FIH Players of the Year in the 2018 Hockey Stars Awards, the International Hockey Federation (FIH) has announced.

Female Player of the Year Eva de Goede, 29, was one of the superstars of the all-conquering Netherlands team that dominated the Vitality Hockey Women’s World Cup London 2018 in July and August last year, having been a consistently brilliant midfield performer as the Oranje stormed to the title. It was a second successive World Cup title for the 200-capped De Goede, who also captained the Netherlands team that stormed to victory at the Wanglibao Champions Trophy 2018 in Changzhou, China. De Goede received almost 29 percent of a closely contested vote, taking the crown ahead of compatriots Lidewij Welten and Xan de Waard as well as Spain’s Georgina Oliva and Stacey Michelsen of New Zealand. With Netherlands Head Coach Alyson Annan being named Female Coach of the Year for a second year in succession, it was very much a double celebration for the Dutch contingent.

Red Lions defender Arthur Van Doren, 24, was named Male Player of the Year for a second successive year, being one of four Belgian winners in the FIH Hockey Stars Awards for 2018. Last year Van Doren claimed both the Player and Rising Star of the Year Awards, and another exceptional year for this wonderfully gifted athlete has brought further thoroughly deserved accolades his way. Van Doren was a stand-out performer as Belgium claimed a first ever World Cup title, being named as the competition’s Best Player in Bhubaneswar. Long recognised as a truly world class defender, Van Doren’s athleticism, skill and the ability to instantly turn defence into attack has seen him evolve into one of the true superstars of the game. With 28 percent of the vote, Van Doren took the Male Player of the Year title ahead of fellow Red Lion Simon Gougnard as well as Billy Bakker (NED), Barry Middleton (ENG) and Jake Whetton (AUS).

Van Doren was not the only member of the Belgian set-up to win an award, with 31-year-old Red Lions shot-stopper Vincent Vanasch – a star performer in Belgium’s shoot-out triumph over the Netherlands in the World Cup final –claiming 46 percent of the vote to win his second successive Men’s Goalkeeper of the Year title ahead of Pirmin Blaak (NED), Tyler Lovell (AUS), George Pinner (ENG) and Tobias Walter (GER). Arthur De Sloover’s stunning, composed performances in the Belgium defence saw him named as Male Rising Star of the Year, the prize available to players born on or after 1 January 1996. De Sloover, 21, took 34 percent of the vote, edging ahead of fellow nominees Tim Brand (AUS), Thijs van Dam (NED), Jake Harvie (AUS) and Timm Herzbruch (GER). Belgium’s World Cup-winning Head Coach Shane McLeod was named Male Coach of the Year, with the New Zealander adding a second title to the one he shared with Netherlands coach Max Caldas at the 2017 Awards.

England’s Maddie Hinch, 30, was named Female Goalkeeper of the Year for a third year in a row, adding another title to those claimed in 2016 and 2017. In a category also featuring Rachael Lynch (AUS), Ayeisha McFerran (IRL), Maria Ruiz (ESP) and Ye Jiao (CHN), it was Hinch who took the crown with almost 40 percent of the vote. The Female Rising Star Award went to 22-year-old Argentina midfielder Lucina von der Heyde, who finished ahead of Nike Lorenz (GER), Ambrosia Malone (AUS), Lena Tice (IRL) and Marijn Veen (NED) with over 26 percent of the vote. It was the fourth time in five years that the Rising Star prize has been won by a player from Argentina, with Florencia Habif winning the award in 2014 before Maria Granatto claimed back to back titles in 2016 and 2017.

The world’s top officials were also given deserved recognition. Germany’s Michelle Meister was chosen by the FIH Officials Committee as Female Umpire of the Year and Poland’s Marcin Grochal won Male Umpire of the Year. Michelle Meister umpired at the Indoor World Cup in Berlin at the start of 2018 before being involved in ten matches at the Vitality Hockey Women’s World Cup London 2018 as either an umpire, reserve umpire or video umpire. Grochal took charge of various matches at the Odisha Hockey Men’s World Cup Bhubaneswar 2018, including the quarter-final and semi-final stage before being given the privilege of officiating the gold medal game between Belgium and Netherlands.

Whilst the Coaches of the Year were chosen by an FIH panel and the Umpires by the FIH Officials Committee, the Player, Rising Star and Goalkeeper awards consisted of both a peer vote consisting of fellow players and coaches as well as a fan vote on www.fih.ch, which saw over 110,000 votes being cast. The votes were calculated as a weighted percentage (75% for the peer votes and 25% for the fan votes).

Speaking about this year's awards, FIH President Dr Narinder Dhruv Batra said: “I wish to offer my sincere congratulations to all FIH Hockey Stars Award winners for their outstanding contributions to 2018, a special and hugely memorable year for our sport. To be named as the very best in the world in a chosen field, whether as a player, coach or an umpire, is an honour that recognises relentless dedication, hard work and sacrifice in order to attain such a high level. Whilst the winners will undoubtedly point to their team-mates, coaching staff or fellow officials as being instrumental to their respective successes, there can be no doubt that their exceptional performances as individuals are worthy of special recognition. Congratulations to each and every one of you, on behalf of the FIH and the entire hockey family.”

Female Player of the Year 2018

Female Rising Star of the Year 2018

Female Goalkeeper of the Year 2018

Male Goalkeeper of the Year 2018

Female Umpire of the Year 2018