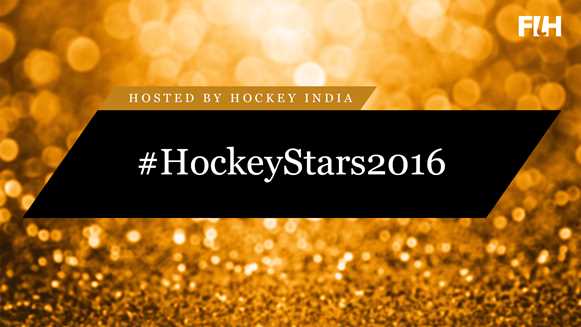 Hockey Stars Awards Ceremony: Who will take home the prizes?

The wait is almost over! This coming Thursday (23rd February), the FIH, in partnership with Hockey India, will announce the winners of the Hockey Stars Awards 2016 at a prestigious ceremony in Chandigarh, India.

The Crystal Ballroom at Chandigarh’s five-star Lalit Hotel will play host to a glittering event that will celebrate the success of all nominated candidates, providing a superb opportunity to reflect on what was a truly remarkable year for hockey.

It is the first ceremony of its kind to recognise those who have made such a significant contribution to the sport and, with a huge media presence, live streaming and updates throughout via FIH channels, the event is another milestone in the ongoing drive to raise the global profile of hockey’s superstars.

In addition to announcing the male and female Umpiring Awards, the following nominees are each in with a chance winning the following global accolades:


The ceremony will look back at the Hockey Champions Trophies, Rio 2016 Olympic Games, the Hockey Junior World Cups and all other key hockey events from the past year, showcasing hockey’s superstars at their best.

Hockey’s action-packed image will be evident throughout, with performances from the likes of ‘India’s Got Talent’ television stars Papai & Antara making this a truly inspirational event, befitting the first ever Hockey Stars Awards ceremony.

Those who cannot attend need not worry as the entire ceremony will be livestreamed via FIH’s YouTube channel, while all of the behind the scenes action will be shared via FIH Twitter, Instagram and Snapchat.

In recent weeks FIH has been running a competition through our social media channels, giving two lucky fans the chance to attend the Awards in India. The prize on offer included return flights to India for the competition winner and a friend, five nights’ accommodation at the five-star Lalit Hotel, two VIP invitations to the Awards plus VIP tickets to the Coal India Hockey India League Final. We can reveal that the winner of the competition is 23-year-old hockey fan Ward Menken from the Netherlands, who will be accompanied by friend Feiko Keilholz on a trip that neither will ever forget.

Speaking about his feelings regarding the competition win, Ward said: “It came as a massive surprise to me! A friend gave me the link for the competition a few weeks ago and normally I wouldn't fill these in, but we were just sitting on a couch and I thought ‘let’s give it a go’. To be honest, I had totally forgotten about it until I received a phone call from Switzerland telling me that I had won. I thought someone was just joking with me! When the caller convinced me that it wasn’t a joke, I laughed! I had never won anything in a competition like this before so this is a new experience for me, but I think I can get used to it!”

Although the FIH Hockey Stars Awards have been presented for many years to winners across the world, this first Awards ceremony marks a key milestone. The ground-breaking event will bring hockey’s stars together in one location, providing another opportunity to feed the ever-growing broadcast and media interest in the sport.

Speaking about this, FIH President Dr Narinder Dhruv Batra said: “This Awards ceremony is yet another example of hockey increasing the degree of professionalism across all levels of the sport, a key component of the FIH’s 10-year Hockey Revolution strategy.”

He continued: “These Awards are an important opportunity to generate more followers around the globe by raising the profiles of hockey’s athletes, coaches and officials. By creating hockey heroes who appeal to all sports fans, not just hockey fanatics, it is hoped that these stars will become household names as hockey’s profile continues to grow. This is essential to our strategy’s overarching goal - to make hockey a global game that inspires the next generation.”

More information about the 2016 Hockey Stars Awards is available on the brand new Hockey Stars website which can be accessed via FIH.ch. Other updates will be posted via FIH social media channels during the run up to and during the event using the hashtag #HockeyStars.