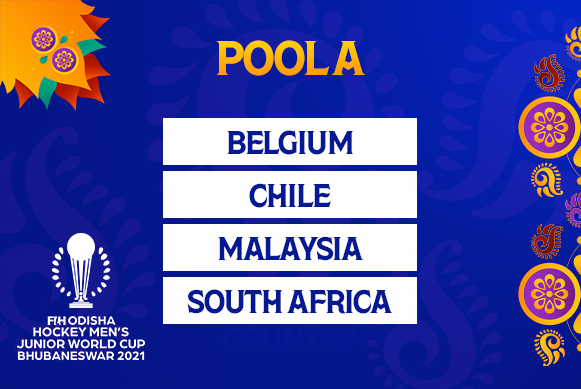 As part of our build-up to the FIH Odisha Hockey Men’s Junior World Cup Bhubaneswar 2021, we bring you the first of four Pool previews which examines the qualification routes and past form of the teams that will compete at the showpiece event in India.

Belgium, Chile, Malaysia and South Africa all feature in Pool A, with a top two finish being the only way to secure a place in the competition quarter-finals and thus maintain hopes of Junior World Cup glory.

About the team: Following their silver medal at the 2016 Men’s Junior World Cup competition in Lucknow, India – Belgium’s greatest performance in the competition – the Junior Red Lions will be determined to go one place better this time around. A far from perfect fifth place finish at the 2019 EuroHockey Junior Championship in Valencia, Spain was enough for Belgium to book their ticket to Bhubaneswar, the Indian city where their senior team created history by winning the Odisha Hockey Men’s World Cup in 2018. With the senior men’s team now also the Olympic champions, this next generation of Belgian hockey could well feel suitably inspired to make their mark.

About the team: Chile created a little bit of history at the2021 Men’s Junior Pan American Championship, which was played in August on home in Santiago. The team became junior continental champions for the very first time, defeating defending champions Argentina – who had won all 11 previous editions of the competition – in the final thanks to a drama-filled shoot-out after the title match finished with the scores locked at 1-1. It was a landmark moment for the young team, inspired by the goal-scoring exploits of Andrés Pizarro, who netted seven times to finish at the tournament’s top scorer as Chile qualified for the Junior World Cup for the first time since 2009. As the Junior Pan American champions, Chile have every reason to feel confident about their chances of success in Bhubaneswar.

About the team: Malaysia – who will host the 2023 edition of this event – have competed in all but one of the 11 FIH Men’s Junior World Cup tournaments staged to date, with their performances being a very mixed bag. On three occasions they just missed out on the podium, finishing fourth in 1979, 1982 and 2013, but have also endured some difficult campaigns where they have finished towards the bottom of the standings. With flair players aplenty, they can hurt any team in the world and are not to be under-estimated. Malaysia’s place in the competition was confirmed by being nominated by the Asian Hockey Federation following the unfortunate COVID-19 related cancellation of the 2021 Junior Asia Cup, which acted as the qualification competition for the Junior World Cup in Bhubaneswar.

About the team: Like Egypt, South Africa’s Men’s Junior World Cup ticket came courtesy of a nomination by the African Hockey Federation (AfHF). Following the cancellation of the Junior Africa Cup 2021 in Namibia due to the ongoing COVID-19 global health pandemic, AfHF based their selection on the results of the 2016 Junior Africa Cup, where South Africa finished in second place. They made their Junior World Cup debut at the Hobart 2001 (AUS) event and have competed in every subsequent competition, with their 10th place finish at Lucknow 2016 being their best to date. South Africa’s senior team turned heads at the Olympic Games Tokyo 2020 with some scintillating attacking performances. Can the juniors do the same?

The opening match of the FIH Odisha Hockey Men's Junior World Cup Bhubaneswar 2021 will see Belgium facing South Africa on 24 November at the Kalinga Stadium, the outstanding venue which hosted the last FIH Men’s Hockey World Cup in 2018. The competition final will be played on 5 December. To see the complete match schedule, click here.