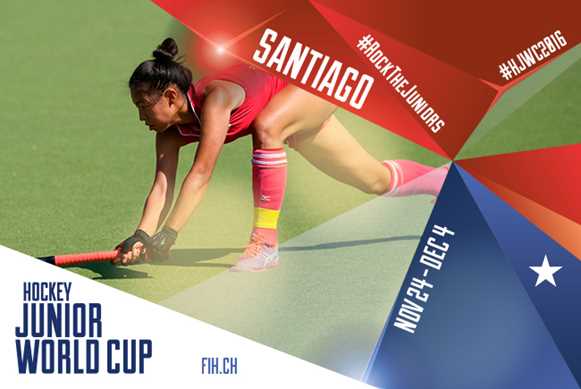 Positions 9-16th were confirmed at the women’s Hockey Junior World Cup 2016 in Santiago, Chile earlier today, with eight teams playing their final classification matches in what was an action packed day of hockey.

With these being these teams last matches, the focus now turns to the final day tomorrow when the women’s Hockey Junior World Cup 2016 champions will be crowned.

The final is the last match of the day, following the bronze medal match. Earlier on, the 5-8th classification matches will take place, all at the following times (local – CLST):

Here’s a summary of all today’s action:

China 0, Japan 2
Japan got off to the best of starts in their match against Asian rivals China as Maho Segawa opened the scoring after five minutes. Japan were on top for most of the opening half and managed to double their lead through Kanon Mori in the 21st minute after a scramble in the China D. China tried their best to get back into the match but Japan’s structure and attacking flair did not falter throughout. Despite finishing ninth, Japan will be happy with their performance at what was their debut women’s Hockey Junior World Cup. Speaking about today’s match, Japan captain Yu Asai said: “We stuck together and got through what was a hard match. It makes it extra special to beat a team from Asia, but also because China are a very good team. So it’s good to play well, stick it out and win against some quality opposition.”


Korea 2, Chile 2 (Chile win shootout 3-1)
Hosts Chile were adamant on giving the thousands of home fans who have cheered them on throughout this event one last opportunity to celebrate in the last match of the day. And that they did when they opened the scoring after only eight minutes through captain Denise Krimerman. It wasn’t long though before Korea drew level through a penalty corner thanks to Soyun Moon. After the half-time break Korea looked the most likely to score and found the back of the net after five minutes as Seoyeong Kim got on the end of a long ball into the D to put the Asian team ahead. With just under 10 minutes left to play Chile’s Sofia Machado Paonessa sneaked the ball under Korean goalkeeper Eunhee Lim to level the score once again. Neither team could find a way through so the match went to a shootout and it was there that the Chilean captain gave the home fans the fairytale ending as she scored the winning goal as they won 3-1.

New Zealand 8, South Africa 2
New Zealand and South Africa played out this highly entertaining game, although the African champions will be disappointed to have shipped so many goals in their final match at this event. New Zealand’s Deanna Ritchie scored two from penalty corners, whilst Megan Hull (PC), Tarryn Davey, Kayla Reed, Emily Wium, Alia Jaques (PC) and Catherine Tinning all got on the scoresheet for New Zealand. South Africa’s two goals game from Tarryn Glasby (PC) and Danielle Cairns. Speaking afterwards, New Zealand captain Tessa Jopp reflected on their tournament. She said: “It was a great way to end the tournament – finish on a high. Everyone played a really good game, for both teams, so it was good to get the win. Today we gave the easy ball, flowed with our passes and created spaces which made passing a lot easier for ourselves.” Speaking about the importance of this event she concluded: “It’s the pinnacle event for us. Some of us have been training for this event for two years so it’s a big platform and a stepping stone to the Blacksticks (New Zealand’s senior team).”

Zimbabwe 1 France 3
Zimbabwe left their best performance for last as they made France work for their victory as both teams battled to avoid finishing bottom of the pack. France went ahead as Victorine Vankemmel scored the first of her two goals after only 12 minutes. Zimbabwe did not let that dampen their spirits however and they stunned the French as Tyla Groenewald converted a scrappy penalty corner. With the scores tied 1-1 at half-time France came out fighting in the second half. Vankemmel scored her second of the match through a penalty corner in the 58th minute before Noa Roque made sure of their victory in the 61st minute through another penalty corner.