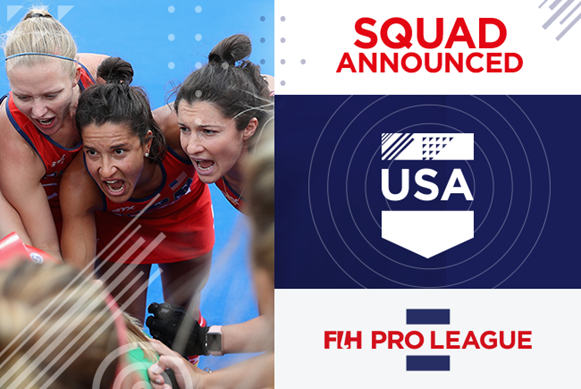 2019 marks a new era for field hockey fans – the launch of the FIH Pro League. Set to debut in early 2019, this home-and-away entertainment event will provide for the first-time ever, a regular calendar of must-see events played in packed stadiums across the world. U.S. Women’s National Team Head Coach Janneke Schopman and coaching staff have named the 25-athlete roster that will participate in this inaugural league involving the world’s leading hockey nations.

"The FIH Pro League is an exciting unknown that we as a team are looking forward to," commented Schopman. "The opportunity to play high-level games on a consistent basis is something we have never had and gives us the opportunity to play in a high-pressure environment. The amount of travel brings an interesting element to all of this in terms of preparation, but we are ready to hit the ground running."

To perform in goal, Schopman has named three goalkeepers to the FIH Pro League roster. Jess Jecko (Sauquoit, N.Y) has been a member of the squad since 2016 and she is joined by newcomers Kelsey Bing (Houston, Texas) and Kealsie Robles (Yorktown, Va.), both who were named to the team earlier this week. This is accompanied by a defense led by Rio 2016 Olympians Caitlin Van Sickle (Wilmington, Del.), Ali Froede (Burke, Va.) and Julia Young (Yorktown, Va.). Adding strength in the midfield is Olympian Alyssa Manley (Lititz, Pa.), who is just shy of 100 international caps, and newcomerLinnea Gonzales (Bel Air, Md.), supported by fellow Olympians Jill Funk (Lancaster, Pa.) and captain Kathleen Sharkey(Moosic, Pa.) as strikers. This roster is a blend of some rookies who are looking to get their first taste of high-level international competition.

The FIH Pro League is an elite annual competition in field hockey featuring the top nine male and female nations playing each other once at home and once away in a regular season stretching from January to June. The top four nations will compete in the Grand Final in The Netherlands in June to determine the champion. The vision for the competition is groundbreaking in global sport providing an international league which offers consistency for broadcasters and spectators.

USA opens up their FIH Pro League competition in Cordoba, Argentina on February 2 to play Pan American rivals, Los Leonas. This is followed by their first home game against The Netherlands on February 16 at Wake Forest University in Winston-Salem, N.C. Next, they will travel Down Under to Play Australia on March 2 and New Zealand on March 8 before hosting a two-game weekend at Spooky Nook Sports in Lancaster, Pa. against Belgium on March 29 and Great Britain on March 31. The month of April consists of all away games with Belgium on April 10, The Netherlands on April 14, Great Britain on April 27 and Germany on April 30. There is a stint of three home games at Spooky Nook Sports in May beginning with Australia on May 10, followed by Argentina on May 12 and China on May 18. USA’s final three matches of the league come in June when they host New Zealand on June 1, then travel to China for a game on June 15 and finish at home with a game against Germany on June 22. Click here for the full schedule.

FIH Pro League Bundle Tickets are now available for purchase to the public at an Early Bird Price. Only tickets in Sections B, C and E in the Series Pass, Four Game and Weekend Pass 1 (BEL & GBR) categories are available. This exclusive Early Bird pricing is only available now until Tuesday, January 15.