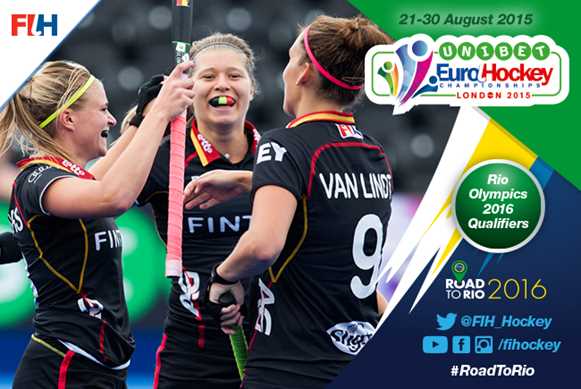 Belgium women put their opening game draw against Spain behind them as they put four goals past Spain in their second game of Pool A at the Unibet EuroHockey Championships 2015 in London.

Belgium's Red Panthers took the lead when Barbara Nelen worked some trickery down the right side of the pitch before her pass found Louise Versavel, who lifted the ball over Poland goalkeeper Marta Kucharska after only 13 minutes.

Belgium started brightly in the second quarter, Alix Gerniers was on hand to benefit from a rebounded penalty corner shot to double her team’s lead after 17 minutes. They then extended their lead to 3-0 after 20 minutes thanks to an almost identical goal by Emilie Sinia.

The second half began with a solo goal from Judith Vandermeiren after 31 minutes. The player picked up the ball outside the circle and ran into it unopposed before striking a shot into the corner of the goal.

Poland scored a consolation goal with one minute to go through Pauline Okaj to finish the game on a positive note.

Following the game Poland goalkeeper Marta Kucharska said: “That was hard work! Everytime the Belgian's shot, there were four or five players ready for the rebound. In the next game, we need the defence to get in front of their players and play together as a team in all areas of the pitch - we were a bit too individualistic out there today.”

Kelly Jonker and Caia Maasakker each picked up two goals each as Netherlands carried on their high goalscoring form as they defeated Spain 8-1, leaving them with 17 goals after two games, firmly at the top of Pool A.

The sole goal from Spain's Berta Bonastre will be small positive in a game where Netherlands enjoyed more than 80 per cent of the possession.

It took Netherlands just 10 minutes to go ahead. Carlien Dirkse van der Heuvel was able to pick up the ball as it rebounded from Spain goalkeeper Maria Ruiz, and hit the ball into the net from the edge of the circle.

In the second quarter Netherlands Willemijn Bos had a penalty corner saved by Ruiz but the ‘keeper was unable to keep out Kelly Jonker as she scrambled a ball over the line in the 22nd minute.

Jonker was involved again when she created space for Ellen Hoog to fire in a shot, but it was teammate Marloes Keetels who added the last touch to make sure of the goal after 24 minutes.

On the stroke of half-time, Eva de Goede made it 4-0 when a ball fell fortuitously at her feet after a mis-played penalty corner. The striker saw her shot roll over the line, just out of reach of reach of Spanish goalkeeper Ruiz.

Not much changed in the second half as the Netherlands continued to dominate. Naomi van As made it 5-0 after 31 minutes, then Jonker scored again three minutes later for her second of the game. Caia van Maasakker then scored from a penalty corner after 38 minutes.

Netherlands Maasakker scored her second after 50 minutes to make it 8-0 after replacement goalkeeper, Maria Lopez made the initial save and Rocio Gutierrez had saved off the line. Maasakker was on hand to fire the rebound under the diving Lopez.

Spain's consolation goal came with only three minutes left on the clock as Berta Bonastre tipped the ball past Joyce Sombroek in the Netherlands goal.

Following their latest win, Netherlands goalkeeper Joyce Sombroek said: “This was another good performance, but, the way we stay at the top is to keep critical and look for ways to do things better. For example, yesterday against Poland we could play expansive hockey as they defended deep, today we had to adjust to Spain defending higher up the pitch.”

Meanwhile Spain's Rocio Ybarra said: “They are number one and they are head and shoulders above the rest. We will keep learning, improving and trying to close the gap between us and the teams ahead of us. For us, this is a long-term ambition.”