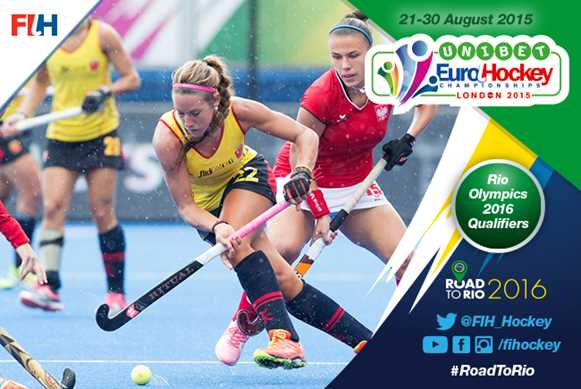 It was another pulsating day of action at the 2015 Unibet EuroHockey Championships in London, with Spain women producing a remarkable goal-scoring performance to overturn a huge goal-difference deficit to eventually secure a place in the competition semi-finals ahead of Belgium’s Red Panthers.

Spain’s 10-0 win over Poland proved to be hugely significant, meaning that Belgium needed an unlikely draw against reigning World and Olympic champions the Netherlands in Pool A’s final match. It proved to be a bridge too far for the Belgians, with the Dutch cruising to a comfortable win to seal Spain’s place in the final four. Later in the day, host nation England confirmed their place as the winners of Pool B with a comprehensive victory over reigning European champions Germany.

The women's semi-finals, which take place on Friday (28th August), will see Pool A winners the Netherlands take on Pool B runners up Germany, while host nation England will do battle with Adrian Lock’s ever-improving Spanish outfit.

More details on Wednesday’s matches can be found below.

Spain 10-0 Poland
Lola Reira hit a hat-trick as Spain thrashed Poland to boost their chances of reaching the semi-finals, something that was later confirmed when Belgium failed to secure the necessary point that they needed in the afternoon meeting with the Netherlands.

Prior to the Pool A fixture, Adrian Lock’s side knew that they would need a 10-goal swing in their favour to overtake Belgium’s goal difference and give themselves a realistic chance of making the final four. A 10-0 victory over the Poles piled the pressure on the Red Panthers, and it proved to be enough as the Belgians went down 5-0 against the top ranked team in the world.

Speaking on their landslide victory, Maria Lopez said: “The whole team played great, but we achieved what we were fighting for. Getting 10 goals is not easy, so we did well.”

Netherlands 5-0 Belgium
Belgium’s Red Panthers went into this game knowing that a score draw or win against the Netherlands was their only hope of reaching the competition semi-finals.

However, scoring a goal against a side that had scored 17 goals and conceded just one in their two previous pool matches was always going to be tough, and there was never a chance that the Netherlands would be relaxed or take it easy in this fixture. The Dutch girls produced a performance that was a masterclass in patience and control, with inspirational captain Maartje Paumen scoring twice and Valerie Magis, Caia van Maasakker and Ellen Hoog also chipping in with goals.

A jubilant Kelly Jonker said: “We have had two days off, so it was a challenge to get straight into the game, but then we hit our stride. When we get going we like to play flowing, showcase hockey.”

Scotland 3-1 Italy
Scotland secured third place in Pool B with a 3-1 victory over Italy in a scrappy match played in torrential rain at the Lee Valley Hockey centre.

All of the goals came in the third quarter of the game, with Scotland captain Leigh Fawcett netting a minute after half time before Rebecca Merchant doubled the advantage five minutes later. Moments later, Italy captain Chiara Tiddi pulled a goal back for the Italians but the Scots soon reestablished their two-goal cushion when Kareena Marshall deflected home an Aileen Davis drag-flick to complete the scoring.

The result secured a third place finish in Pool B for Scotland, with Italy finishing fourth.

England 4-1 Germany
Super-striker Alex Danson hit a hat-trick as England thrilled the home fans with a 4-1 win over Pool B rivals and reigning European champions Germany, a result which puts the host nation into the semi-finals as the Pool winners.

England will now face a final four meeting with Spain, who finished second in Pool B, while Germany’s Die Danas have the unenviable task of defeating reigning world and Olympic champions the Netherlands if they are to successfully defend their European title.

Despite Danson’s hat-trick, it was team-mate Sophie Bray who opened the scoring in just the second minute of the game, with Danson grabbing her first just a minute later to send the home supporters into raptures. Germany were rattled for much of the opening two periods, but hit back in the third quarter when Kristina Hillmann fired home. However, Danson scored late in the period before completing her treble in the fourth quarter to give England a resounding victory and set up a semi-final showdown with Spain.

Keep up to date with all of the action on www.eurohockey.org and www.eurohockey2015.co.uk. Information about TV scheduling and live streaming can be found by clicking here.