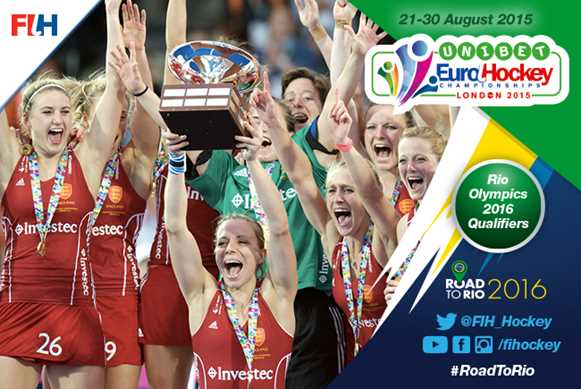 England women are the new champions of Europe following a remarkable shoot-out victory over reigning World and Olympic champions the Netherlands in the final of the Unibet EuroHockey Championships in London.

Goalkeeper Maddie Hinch was the heroine, producing a mesmerising performance in the shoot-out to guide her team to their second European crown, adding to the one they claimed way back in 1991, which was played in Brussels, Belgium.

Trailing 2-0 going into the final quarter thanks to a Caia van Maasakker penalty corner double, the prospect of a victory over the top ranked team in world hockey appeared to be slim. However, goals from Sophie Bray and Lily Owsley thrilled a capacity crowd at the Lee Valley Hockey & Tennis Centre before Player of the Match Hinch produced a goalkeeping masterclass to give Danny Kerry’s charges a brilliant and utterly memorable tournament triumph.

Earlier in the day, Germany took the Bronze medal with a big win over Spain, while Belgium and Scotland were also winners in the battle to avoid relegation from the top table of European competition.

Women’s final day brought to an end a sparkling week of top class international hockey, but it is certainly not the last time that London’s wonderful Lee Valley stadium will welcome the world’s best teams. Next June, the Women’s FIH Champions Trophy will take place in the stadium and the tickets for that event are already on sale. For more details, click here.

For more info on Sunday’s matches from the Unibet EuroHockey Championships, see below.

Gold: England 2-2 Netherlands (3-1 SO)
England produced an incredible late comeback, surviving a huge and sustained Dutch barrage to land their second EuroHockey Championships with ace shot-stopper Maddie Hinch producing one of the performances for the ages.

They eventually prevailed in a shoot-out 3-1 after fighting back from 2-0 down with eight minutes to go in regular time to win in the most dramatic of fashion.

Asked to put the feeling into words, goalkeeper Hinch said: “That’s impossible! Literally, the best, best feeling in the world and boy do we deserve it. We’ve had some lows but this has been one hell of a summer and this has been coming. I’m just in a state of shock. I don’t know what to say. It just shows the level of belief in our team at the moment to come from two goals down, to say ‘we’re not giving up on this’ and that’s exactly what we did.”

Caia van Maasakker’s third quarter penalty corner double looked to have won the tie for the Dutch as they eventually broke through a blood and guts English defence. She found her range from the eighth and ninth Dutch penalty corners, finally finding a route past the superb defences of Hinch who kept out 22 shots on target overall.

But England produced a rousing comeback in front of the capacity crowd at Lee Valley with Sophie Bray and Lily Owsley’s corner rebounds in the closing eight minutes, earning their shoot-out chance before emerging victorious over the top ranked team in world hockey.

Bronze: Germany 5-1 Spain
A hat trick for Germany’s newest superstar Charlotte Stapenhorst was the icing on the cake for Germany in the Unibet EuroHockey Championships Bronze medal match. Germany’s hold on the EuroHockey title might have disappeared in the semi-finals, but the team was determined to leave the Lee Valley Hockey and Tennis Centre with a medal round their necks and their dismantling of the Spanish team was a study in structure and discipline.

“That victory was really important for us,” said Germany’s Kristina Hillmann. “We were so disappointed at our performance against the Dutch.”

In an insight into the tactics used, Hillmann added: “We played a great defence, swinging the ball around the back at a high pace and creating spaces through to our forwards.” It was a point that Spain’s Georgina Oliva agreed with: “They moved the ball so quickly, we chased it and got tired, so when we came to attack, we were too tired to be effective.”

Belgium 4-3 Italy
Retiring captain Liselotte van Lindt scored a goal and produced a player of the match performance to help Belgium take a 4-3 win against Italy, a result which relegated the Italians from the top tier of European hockey. Van Lindt opened the scoring for Belgium in the 4th minute of the match, before Italy moved into a 2-1 lead thanks to strikes from Aldana Lovagnini and team captain Chiara Tiddi. Two Belgian goals in three minutes from Manon Simons and Judith Vandermeiren gave Belgium a 3-2 lead before the ever resilient Italians levelled again when Giuliana Ruggieri found the net. The winning goal arrived in two minutes into the final quarter, with Emma Puvrez firing home to settle the contest.

Scotland 2-0 Poland
Scotland warded off any danger of potential relegation to EuroHockey Nations Championship II with a composed 2-0 win over Poland, ending the tournament in sixth place overall thanks to strikes from Nikki Kidd and Vikki Bunce. The Poles had a chance of leap-frogging the Scots in the Pool C rankings if they could summon their first victory at this elevated level of competition.

Scotland’s Kareena Marshall said: “We achieved our minimum  target to maintain our place in this division and, you know what, in two years time, we want to step up. We definitely want to make the semi-finals; that would be phenomenal. Ireland have done it [in the men’s competition] so why not?”