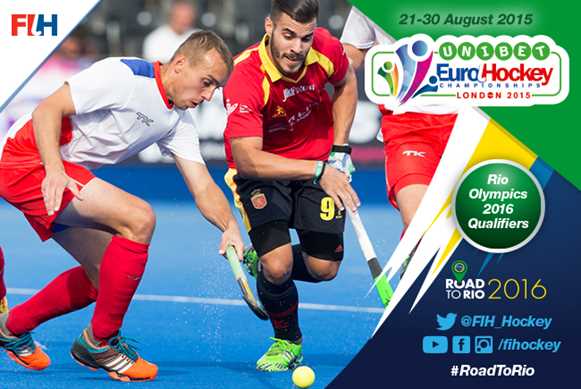 Spain bounced back from their opening day defeat to Netherlands to record a 9-0 win against Russia.

Spain's Red Sticks won the second match of their Unibet EuroHockey Championships with Xavi Lleornart scoring after two minutes before Pau Quemada doubled their lead on the 15 minute mark.

Quemada scored his second and Spain’s third from a penalty corner five minutes into the second quarter and Alex Casasayas stepped onto a loose defensive ball to make it 4-0 seconds later.

Despite occasional attacks by the Russians, the Red Sticks began to tighten their hold of the game. Quemada scored his hat-trick after 29 minutes – again from a penalty corner.

With seconds left in the half Casasayas scored his second, a simple tap-in after some good build-up play. This made it 6-0 to Spain going into the break.

Quemada made it four from four after 45 minutes when he slotted home Spain’s seventh at the end of the third quarter, before scoring his fifth after 55 minutes as he hit the ball into an empty net - Spain’s eighth goal of the game.

Gabriel Dabanch then scored the ninth goal on the hour mark.

After the game, Spain captain Sergei Enrique said: “After the Hockey World League we changed our philosophy so now we take it one game at a time. And we are Spain, we pride ourselves on playing as a team and that is what you saw today.”

Meanwhile, Russia's Sergey Kostarev said: “We had no control out there today. Basic skills were lacking and Spain took full advantage.”

Netherlands made it two wins from two as they defeated hosts England 2-0 on Sunday evening to retain top spot in Pool A.

With just two ranking places between them, the game turned out to be a close encounter.

The Netherlands made the breakthrough however, after 26 minutes of play. Mirco Pruijser was on hand to hit a rebounded penalty corner into the goal, despite the best efforts of England goalkeeper George Pinner.

The fourth quarter saw both teams continue at the high pace, quality and intensity that had been common throughout the game, but as England pushed for an equaliser the game was put beyond doubt when Constantijn Jonker turned in a cross from Rogier Hofman into the goal to give Netherlands a 2-0 lead after 55 minutes.

Netherlands goalkeeper Jaap Stockmann said his team were satisfied with the result but added the team still needed to discover greater consistency. He said: “We played well for periods but, like our performance against Spain, we did let the intensity slip for a time.”

The result leaves the Netherlands clear at the top of Pool A, with England ahead of Spain on goal difference.

Belgium picked up their first win of the Championship as they defeated neighbours France in what was another close game between the two teams.

France took an early lead through one of a quartet of 21-year-olds appearing in the line-up. After six minutes, Victor Charlet gave France the lead when his powerful drag flick stunned the Belgium defence.

Seconds before the end of the quarter, Matthew Cobbaert gave Belgium the lead when he turned a cross from captain John-John Dohmen into the goal.

France came straight back into the game with a second penalty corner from Charlet after 17 minutes.

Sebastien Dockier turned the match to Belgium’s advantage when he picked up the ball and slammed it home from a seemingly impossibly wide angle on 34 minutes.

Once again, France showed their resilience and four minutes later Olivier Sanchez shot the ball past Belgium goalkeeper Vincent Vanasch and even the match again.

On the 50 minute mark, Belgium's Tom Boon scored what turned out to be the winning goal from a penalty corner.

Belgium played out a nervous end to the game as Dockier was dismissed from the field thanks to a yellow card with around 10 minutes to go.

After the match, Belgium's Sebastien Dockier said: “Yes, it was a stupid yellow card. Luckily we train for that situation, playing with 10 men, so we dealt with it. France are a team that play short, sharp passes, so we had to work hard. In the end I think our experience paid off.”

France's Olivier Sanchez agreed, saying: “I am disappointed that in the last 10 minutes we didn’t pressure more as they only had 10 men, we had no entries into their circle in that time, but that comes down to experience and a bit of fatigue. We played well, but once again we are on the wrong side of a narrow scoreline.”

Germany finished day 2 of the Unibet European Championships topping the Pool B standings, but were made to work hard to secure three points against Ireland.

It was not until the final few minutes of the last quarter that the reigning champions were able to break through a strong Irish defence.

Lukas Windfeder's drag-flick penalty corner flew past Ireland goalkeeper David Harte to give Germany the lead in the 54th minute.

As Ireland pushed to get back into the game, the field became spread out and openings appeared in the Irish defence. This was exploited when Germany's Florian Fuchs doubled Germany’s lead with a well taken goal from open play after 56 minutes.

Speaking after their loss, Ireland's John Jackson said: “Taking the bigger picture that was an okay result for us. We had a very specific game plan and we stuck to it for most of the game, and that was to keep the goal difference down. We now have a great chance of making the semi-finals and that will be a first.”

Germany's Mo Fuerste agreed it was a tough game for the reigning champions, but said: “On reflection, we probably deserved to win based on possession. Ireland defended well as we knew they would, but for us it was a game of patience and now we have achieved our aim of reaching the semi-finals.”