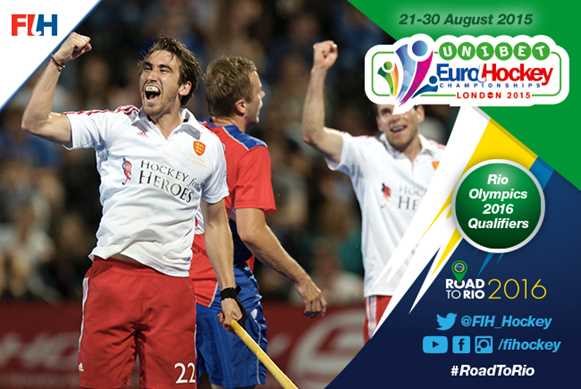 Netherlands defeated Spain 2-0 in the opening game of the 2015 Unibet EuroHockey Championships 2015 which began this evening at Lee Valley Hockey and Tennis Centre in Queen Elizabeth Olympic Park, London.

Netherlands, ranked number two in the FIH world rankings, dominated the first 15 minutes, before they eventually got on the score sheet as Billy Bakker unleashed a shot past Spanish goalkeeper Quico Cortes after 18 minutes.

Spain, ranked 11th in the world, nearly came straight back into the game with two quick penalty corners. Pau Quemada’s shot was saved by Netherlands goalkeeper Jaap Stockmann and Roc Oliva saw his strike go just wide of the post.

The Dutch extended their lead when Mink van der Weerden scored after 24 minutes from a powerful penalty corner strike, his shot going to the right of the diving Cortes.

Five minutes into the final quarter, Netherlands Van der Meerden nearly scored his second with a well-struck penalty corner and Sander de Wijn was unlucky to see his attempt at a rebound go over the post.

Following their win, Netherlands captain Robert van der Horst said: “We were solid, not good, not bad. We didn’t concede so that was good and we played with consistency – which is something that coach Max Caldas has instilled in our team. There was a time when we always wanted to win 5-0, and sometimes that led to us losing 5-0, so now we are happy with a win.”

Speaking after the game, Spain goalkeeper Quico Cortes said: “We actually played well, it was just a case of conceding the goals – we actually pressed and closed them down well for most of the game. Against a team as skilful as the Dutch if you lose possession then you are likely to concede a penalty corner if not a goal. But, we are relatively happy and looking forward to the next game.”

For more information on this game, visit the match page by clicking here.

England defeated Russia 10-1 in their opening game of Pool A, which included a first half hat-trick from David Condon.

The hosts scored six goals in the opening 30 minutes, with Condon scoring three and seven of his team mates also getting on the scoresheet.

Barry Middleton scored after six minutes when he diverted a cross from Mark Gleghorne. They struck again a minute later as Condon doubled England's advantage.

The East Grinstead man scored his second of the match right on the stroke of quarter time, picking the ball up inside the circle and firing a backhand shot into the corner of the net.

It was 4-0 moments into the second quarter thanks to Chris Griffiths. Next, Iain Lewers got in on the act, pouncing on a loose ball inside the Russian half before hitting a low shot into the corner to make it 5-0.

Condon completed his hat-trick five minutes before the break, before Pavel Plesetskii clawed one back for Russia just before half time.

England came out in the third quarter and immediately seized control again. With four minutes on the clock, Ward forced home a goal from close range to get his name on the scoresheet before Mark Gleghorne added the eighth goal with a penalty corner into the roof of the net.

Nick Catlin stabbed in from close range to make it 9-1 with a full quarter still to play before David Ames scored his first goal for England, making it 10-1 to the delight of the home crowd.

After his hattrick, England's David Condon said: “I don’t think we can argue with that. We didn’t have much information on the Russians going into the game so we tried to concentrate on ourselves. We weren’t sure what they would do so we set our stall out and made sure we were aggressive and relentless. With Russia being fairly unknown we weren’t sure how important this game could end up being in our group, so we wanted to set a marker down and make sure we win all our games. We play Holland next, but we’re confident. As a squad we’ve sometimes struggled to create clear chances so to score ten goals will give us plenty of confidence for the next games.”

For more information on this game, visit the match page by clicking here.