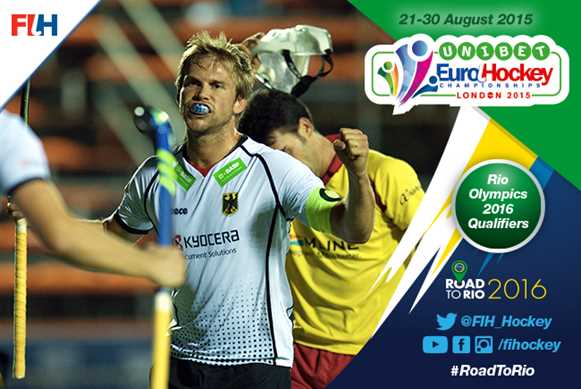 Germany men and women head into this year’s Unibet EuroHockey Championships in London with the aim of making it a consecutive double after their men’s and women’s teams won the European titles in Boom, Belgium, two years ago.

Injured Christopher Zeller (medial meniscus tear) drops out of the squad heading to London and is replaced by club team-mate Marco Miltkau.

In midfield Timur Oruz misses out to Club an der Alster’s Constantin Staib who gets his chance to prove himself at a major international tournament.

Goalkeeper Tobias Walter is replaced by Mannheim’s Andreas Späck as back up to Nicolas Jacobi who remains the number one in the German goal.

Double Olympic champion and co-captain of the team, Moritz Fürste returns to the squad. The German hockey hero had missed the ERGO Hamburg Masters as he had just become a father.

The reigning European champions, ranked third in the world, are heading to London following some excellent form at the Hockey World League (HWL) Semi-Finals. There, they made their mark in the pool stages, scoring 21 goals in four games, including a 9-0 win against Canada.

The women’s team meanwhile will be looking to improve upon their third place finish at the HWL Semi-Final in Valencia, Spain.

Germany women, ranked fifth in the world, secured Olympic Qualification thanks to that result, however they needed two shoot-outs to take third spot, the second of these seeing off world number three ranked Argentina.

Their coach, Jamilon Mülders, has named his squad for the EuroHockey Championship, with two changes to the team that competed in Valencia.

Anissa Korth and Nina Hasselmann have been left out of the team for London with Katharina Otte and Selin Oruz replacing them.

Speaking of this change, Mülders said: “Katharina Otte and Selin Oruz have both earned their places by their achievements and individual qualities. I am certain of their potential and their combination of athletic and technical quality. ”

Julia Müller and Lisa Marie Schütze have not yet overcome injury and so were not considered for the squad.

While in Valencia, Kristina Reynolds was the first choice goalkeeper, Yvonne Frank is set to take over goalkeeping responsibility at the Unibet EuroHockey Championships, with Reynolds being used as a substitute goalkeeper.