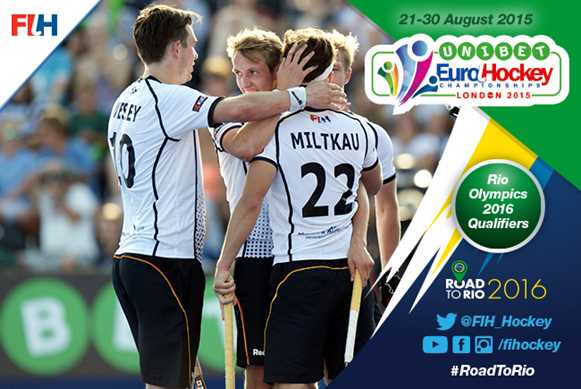 Germany and Ireland get off to winning starts in Pool B

Ireland opened their Unibet EuroHockey Championship account with a hard fought 4-3 win against France on Saturday morning at the Lee Valley Tennis and Hockey Centre in Queen Elizabeth Olympic Park in London.

The game opened with a solo effort from Ireland's Kyle Good after only one minute of play. However, with four minutes of the first half remaining, Frenchman Jean-Laurent Keiffer turned the game on its head when he scored the equaliser after 27 minutes. A sharply hit ball into the circle was turned into the goal by Keiffer, wrong-footing Ireland goalkeeper David Harte.

France then took the lead as Gaspard Baumgarten's strike went flying into the Irish goal after 33 minutes. Ireland then drew level again as Peter Caruth pounced on the rebound from his original shot after 36 minutes.

Ireland then required goal-line technology to confirm their third goal as they took the lead through Jonathan Bruton after 45 minutes. Ireland then went further ahead through a penalty corner strike, their first of the game, thanks to Shane O’Donoghue after 47 minutes.

A third goal for France, scored by Simon Brissac Martin made the last few minutes nervous for Ireland as France pushed for an equaliser which never came.

Following their win, Ireland goalkeeper David Harte said: “Scoring in the first 20 seconds was almost to our detriment. We were glad to get to half-time and regroup. the problem was that our off-ball movement slipped and we gave France the chance to get into the game and, as we saw in the Hockey World League Semi-Final, they are a dangerous side.”

Reigning champions Germany got off to the perfect start as they defeated Belgium 4-0 in their opening game of Pool B on Saturday afternoon.

Their opponents enjoyed much of the attacking possession early on and thought they had went ahead after a pass by Belgium's Cedric Charlier found Tom Boon unmarked in the circle who then slotted home, only for a video referral to rule that the striker had not touched the ball in the circle.

It was however Germany who took advantage after 42 minutes when Niklas Wellen scored with a shot that flew over the head of Belgium goalkeeper Jeremy Gucassoff.

This signalled a period of German domination which resulted in their second goal, as Constantin Staib got on the end of a ball fired in by Linus Butt to deflect the ball past the Belgium goalkeeper after 48 minutes.

Wellen got his second and Germany’s third when he scored again in the 51st minute before the game was put out of Belgium’s reach when Florian Fuchs scored after a quick German interchange of passes after 58 minutes.

The result was Germany's biggest win over Belgium since 2007. After the game, Germany's Linus Butt said: “Belgium always put us under high pressure. They press well and we found it very hard to both stop them scoring and making any chances ourselves. The turning point for us came after Tom Boon’s goal was disallowed, and John-John Dohmen received a yellow card. That gave us the impetus and we built from there.”

For more information about the event, and to buy tickets, visit:http://eurohockey2015.co.uk