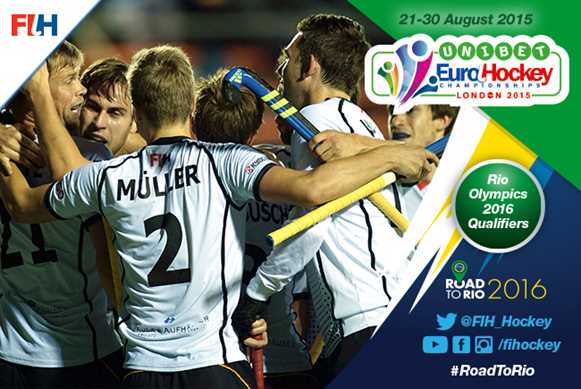 Europe's elite ready to make their mark at EuroHockey Championships

World class hockey returns to London as the Unibet EuroHockey Championships 2015 get under way on 21 August at Lee Valley Hockey and Tennis Centre in Queen Elizabeth Olympic Park.

Teams from around Europe will be going head to head with an added incentive at this year’s event. Not only will they be crowned European Champions, the winners of the men’s and women’s competitions will also guarantee qualification for the Rio 2016 Olympic Games as Continental Champions.

In the men’s event, reigning European champions Germany are heading into the tournament following some excellent form at the Hockey World League (HWL) Semi-Finals in Buenos Aires, Argentina.

Markus Weise’s side proved tough opponents in the pool stages, scoring 21 goals in four games, including a 9-0 win against Canada.

The Netherlands recovered from their disappointing defeat to Germany to beat Canada 6-0 to take third place in Buenos Aires. Notably, the Dutch last won this title in 2007 when it was last held in England.

Belgium, runners up in 2013, will also fancy their chances off the back of a solid HWL Semi-Final tournament in their homeland, losing the final 1-0 to world number one ranked Australia in the last minute of the game.

Also playing in Antwerp, an all-English Great Britain squad came up short against Australia in their semi-final clash. However, with Olympic Qualification assured, they turned on the style to defeat India in the 3/4th place play-off. Having last won this event in 2009, they will be looking to take that form into this competition backed by the home support.

Spain started slowly in HWL Semi-Final in Buenos Aires, losing four out of the first five matches. A shootout win over Korea however, inspired a 3-1 win over New Zealand to take fifth place, which means they still have a chance of qualifying for Rio 2016 even if they don’t win this event.

Ireland matched Spain’s fifth place finish but at the other HWL Semi-Final in the Antwerp. The world number 14 ranked nation matched higher ranked sides such as Great Britain and Belgium, losing narrowly to the hosts having removed their goalkeeper in search of a winner.

France captain Tom Genestet expressed his disappointment at his side’s seventh place finish at the HWL Semi-Final in Antwerp. After a heavy defeat to Australia they recovered to take a point from Pakistan and a win against Poland before eventually overcoming Pakistan in the 7/8th play-off.

Russia did not qualify for the HWL Semi-Finals but gave some indication of their abilities in the previous round in March.

A strong pool stage saw them win against Canada, Trinidad and Tobago and the USA before they were eventually overcome in the semi-finals after Austria won their shootout.

With the men’s competition beginning on 21 August and concluding on Saturday 29 August, the men have a lot to play for in London. With so much on the line, the competition is set to be exciting for everyone involved – players and fans alike.