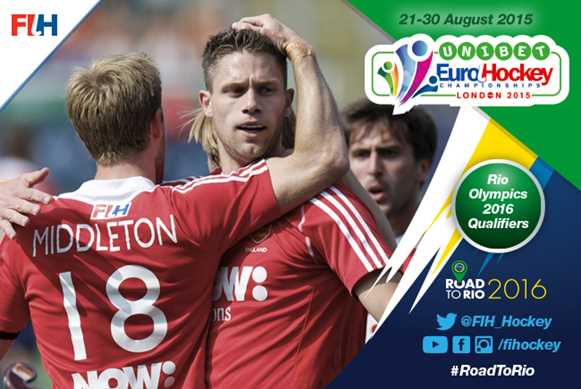 England looking to home fans to inspire them to European titles

Hosts England will be looking to use their passionate home support to inspire them to victory at the Unibet EuroHockey Championships which begin in London later today.

With over 30,000 tickets already sold, both England men and women will be hoping the majority of fans coming along to Lee Valley Hockey and Tennis Centre in Queen Elizabeth Olympic Park will be cheering them on.

Both England teams enter this year's competition following a good run of form at the Hockey World League Semi-Finals, where they participated as Great Britain and guaranteed Olympic qualification for Rio 2016.

The men finished in third spot in Antwerp behind world number one ranked Australia and hosts Belgium, ranked fourth in the world.

In London, England, ranked fifth in the world, will face Netherlands (2), Spain (11) and Russia (19) in Pool A of the tournament.

The 18 man squad who will represent England includes one change from the squad who competed in Antwerp. Reading’s Dan Shingles, who missed the Hockey World League Semi-Final through injury is recalled and replaces Tim Whiteman.

Two key players will be aiming to reach personal milestones during the competition in London. Captain Barry Middleton has scored 97 times for England and Great Britain and could reach the century mark.

Holcombe defender Dan Fox, currently on 95 England caps, will reach 100 in the final game if he features in every match.

Looking towards the Championship, England Head Coach Bobby Crutchley said: "We’re really excited about playing in front of a home crowd. We’re in good shape and we’re looking forward to what will be a tough tournament. The European Championships is one of the hardest competitions there is.”

Their coach, Danny Kerry, has named 18 athletes for this year’s EuroHockey Championship, 14 of whom picked up a silver medal at this event in 2013.

There are two changes from the Great Britain squad that secured Olympic Qualification in Valencia. One of those changes is enforced, as Emily Maguire will represent Scotland at the EuroHockey Championships.

Her place is taken by Sam Quek who returns to the squad for the first time since the Champions Trophy in December.

Kate Richardson-Walsh, who captains the side, has 48 international goals for England and Great Britain combined, so could reach a half century at the tournament.

Striker Alex Danson, who has been named as vice-captain, is also closing on 50 goals. Currently she has scored 47 times for England and will be aiming to reach the 50 mark in London.

There is also a call up for Leicester goalkeeper Sabbie Heesh who has represented Great Britain on two occasions so far. Heesh replaces East Grinstead goalkeeper Kirsty Mackay in the squad.