Where is the Unibet EuroHockey Championships 2015 being held?
Hosted at the Lee Valley Hockey and Tennis Centre on Queen Elizabeth Olympic Park, the venue is a legacy venue to continue the spirit of the amazing London 2012 Olympic Games, where Great Britain women won bronze. It also played host to the Paralympic Tennis tournament during the 2012 Paralympic Games, and the surrounding park area will be turned into a Hockey Fan Park – there’ll be excitement for fans of all ages.

There are two groups with the top two teams going into the semi-finals before a grand final – you won’t want to miss it! 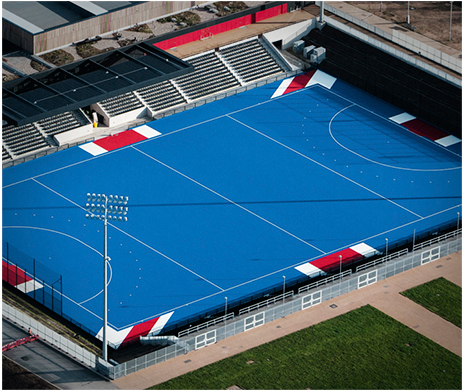 Lots on offer
More details will be available closer to the tournament, but there’ll be a huge amount on offer for all ages, in addition to being able to watch live world-class sport.

There’ll be a fun zone for the kids, pre-match and half-time entertainment, autograph signing sessions from the world’s top players, food and drink including licensed bars, and shops to buy your team merchandise and support your country!

Getting here is easy
Lee Valley Hockey & Tennis Centre is located on the north end of Queen Elizabeth Olympic Park. Public transport is the best and easiest way to get to and from the Park with some of the best transport links in London:

TUBE STRIKES: There are planned tube strikes on Tuesday 25 and 27 August. Visit https://tfl.gov.uk/modes/tube for the latest information.

By coach:
• 010 to Cambridge
• A9 to Stansted Airport
• 741 to Bishops Stortford
• For more information please visit www.nationalexpress.com

The nearest stations are Stratford Station and Stratford International. Both provide step-free access from platform to exit.

Additional tickets are now on sale!

The Unibet EuroHockey Championships 2015 promises a fantastic atmosphere for all ages. There’ll be entertainment on and off the pitch and everyone’s welcome.

The tournament schedule and advance prices are below – tickets are sold in sessions, with the two Finals days as full day tickets. Show your national pride and come and support your nation in an amazing new stadium on London’s Queen Elizabeth Olympic Park!

Why not enjoy inspiring sport, and the emotion of supporting your country, in style? - Click here to see more