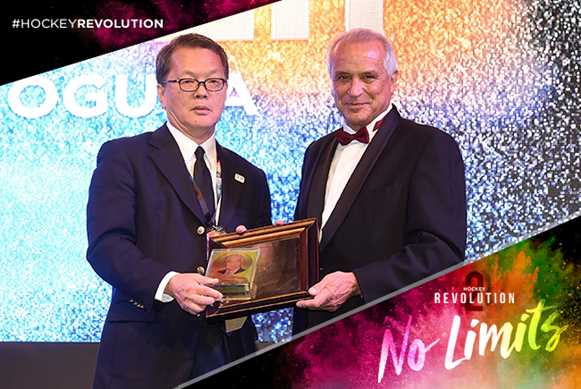 The International Hockey Federation confirmed the winners of this year’s Hockey Revolution Awards at the No Limits Ball in Dubai, United Arab Emirates, earlier today.

10 awards were presented throughout an evening filled with inspiring stories of success from the hockey world as the sport celebrated recent development and achievements at a glitzy event in the Armani Hotel in Dubai.

To find out more about each of the Awards, a full description is available in the FIH website by clicking here.

President of Honour – Leandro Negre
Outgoing FIH President Leandro Negre, from Spain, was awarded the title of President of Honour for his passionate dedication to the sport. In addition to serving as President for eight years, Leandro has dedicated a huge part of his life to the sport, from playing international hockey (as a goalkeeper) for Spain in the 1968 Mexico Olympic Games to working on the organising committee for the 1992 Barcelona Olympics. Leandro served as President of the Spanish Hockey Federation (RFEH) from 1984 to 1992 and later became President of the European Hockey Federation (EHF). During his eight years at the helm of the FIH, Leandro has been the driving force behind the innovative changes in structure and approach to hockey – particularly the first stage of the Hockey Revolution – that has seen the sport's dramatic growth in participants and spectators across the globe.

The Pablo Negre Trophy - Hockey Association of Malawi
The Hockey Association of Malawi (HAM) has been awarded the Pablo Negre Trophy for its incredible progress in hockey development and performance over the past few years. Its strategic hockey plan has six priority areas, including the development of a national hockey stadium and the development of national teams at under-15, under-17, under-20 and senior level.They have established a robust youth development programme which is run in conjunction with the Kadish Foundation and targets young children from six to 17 years old, but HAM has also put resources into the structure around the game, with emphasis on the development of coaches, umpires and judges.

Guust Lathouwers Memorial Trophy - Ray O-Connor
Ray O’Connor of the Irish Hockey Association has been an international Umpire – earning his golden whistle for 100 international matches in 2000 – an Umpire Manager, a mentor to up-and-coming officials, a member of the FIH Umpiring Committee and is currently Chair of the European Hockey Federation (EHF) Appointments Committee.During his years of involvement with hockey at the highest level, Ray has been responsible for some ground-breaking work, including the Road To Projects, which first began with the Road to London 2012. He was also a leading light behind the development of the EHF Umpire Development Panel (UDP), considered one of the most important umpiring projects at continental level.

Theo Ykema Award - Solomon Islands Hockey Association
Natural disasters and political instability had pushed hockey into a corner in the Solomon Islands at the start of the 21st century. However, a huge effort by the Solomon Islands Hockey Association (SIHA) has turned this situation around and the progress made by the association since the release of its plan of action in 2014 has been outstanding.Working with the Oceania Hockey Federation and with help from the FIH Target Assistance Programme (TAP), the SIHA has made progress in a wide range of areas. Key amongst these are the focus on raising participation levels among women; increasing the amount of competitions running at all levels, from school and club to international events; the employment of a communications officer to raise the game’s profile; and the recruitment of a development officer and school visit officers.

Etienne Glichitch Award - Norman Hughes
Norman Hughes has been Continental Development Officer (CDO) for the European Hockey Federation since 2002. Prior to that he was a player and coach for England and Great Britain.During his time as CDO, Norman has been a key player in the design and delivery of coaching courses, including Top Coaches and Coaches 4 Europe programmes. More than 600 coaches, umpires and officials have benefited from his work. Norman also plays a key role in the European Youth Leaders Programme and spearheaded the inclusion of a Paralympics at the EuroHockey.

The Super Fair Play Trophy Rene G Frank - Laura Pigretti
When it comes to long service and high standards you need not look further than Argentina’s Laura Pigretti. She has been a Technical Official at FIH events for more than 25 years – a time span that covers four Olympic Games and three World Cups.Her colleague, Sheila Brown, describes her as: “The fairest, most honest person, who would always go the extra mile.”

HRH Sultan Azlan Shah Award - Fumio Ogura
Fumio Ogura is President of the Institute of International Sports Politics in Japan. During his career in sport, which began as a player for the Japan under-21 team in 1967, Fumio has played for and coached the national team – a role that lasted 20 years – as well as organising numerous competitions across Asia.With Tokyo hosting the 2020 Olympic Games, Fumio has used all of his experience as an advisor to the 2020 Tokyo Olympic Games Bid Committee. Currently, Fumio is Deputy Executive Director of International Relations and Sports Department of 2020 Tokyo Olympic and Paralympic Games.

Diploma of Merit - Resham Singh
Resham Singh is currently Executive Board member of the National Olympic Committee of Kenya and was Kenya’s Team Manager for the 2016 Olympics. Resham represented Kenya at the 1972 Olympics in Munich and was also part of the squad that contested the first World Cup in 1971. Resham turned to umpiring and eventually became a member of the FIH Umpiring Committee after officiating at a number of high profile international competitions. Resham has been awarded the Hockey Legend Award by both the African Hockey Federation and the National TV of Kenya.

The No Limits Ball was part of the Hockey Revolution Part 2 Conference, featuring the 45th FIH Congress, being held between 10-12 November in Dubai. To read about all the latest news from this event, visit the official website by clicking here.