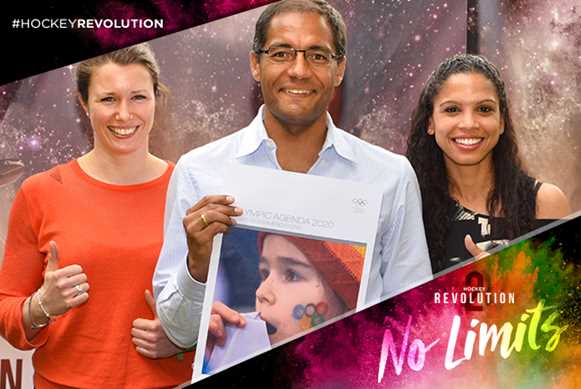 Discover how the Hockey Revolution and Olympic Agenda 2020 strategies are aligning Photo: FIH

The 10-year Hockey Revolution strategy was launched two years ago at FIH's Congress in Marrakesh, Morocco with one primary aim - to make hockey a global game that inspires the next generation. There, a number of defined goals and major initiatives were set out to achieve this.

Since 2014 a lot has been achieved and during the upcoming Conference in Dubai, new exciting elements of the Hockey Revolution will be discussed among more than 330 stakeholders and experts. This includes the new event portfolio, latest updates from all five major initiatives and incredibly valuable information from FIH's Brand Research project.

Many of the Hockey Revolution goals tie in well with the spirit of Olympic Agenda 2020, the International Olympic Committee’s (IOC) strategic roadmap for the Olympic Movement.

For instance, one big goal of the Hockey Revolution is to develop innovative and exciting entertainment events whilst Olympic Agenda foresees to move from a sport-based to an event-based Olympic programme. Furthermore, both strategies are focusing on attracting more young people. Then, Olympic Agenda 2020 calls for gender equality across all sports and aims to achieve 50 percent female participation in the Olympic Games where hockey already features a gender balanced programme.

However, one of the key goals of FIH’s Hockey Revolution strategy is to increase the degree of professionalism throughout all areas of the sport, which also implies to increase the number of female professionals and volunteers working in hockey, be it on the field or in governance structures.

Taking the example of top level sports coaching roles, women are generally still in a minority, but FIH is one of the pioneering international sports bodies leading the way in redressing the balance. For instance, the FIH Women in Elite Coaching Initiative aims to raise the number of female coaches at elite level, especially within the top 12 nations.

Regarding Technical Officials at this summer’s Olympic Games in Rio, FIH had one of the best gender balances of all International Federations (IFs), with a 50:50 split.

Finally, looking at the pure participation numbers in hockey, the sport is played by as many girls and women as by boys and men – be it at the recent Olympic Games in Rio, at regional, national or local levels.

In addition, the Association of Summer Olympic International Federations (ASOIF) will present its recently developed new governance assessment tool. The latter comprises a comprehensive set of five key principles and 50 indicators which FIH will apply in the near future.

Another important topic of Olympic Agenda 2020 relates to the protection of clean athletes - a subject that features also on the top of FIH’s priorities. In Dubai, a dedicated FIH Hockey Academy Management Course tailored for officials from Continental as well as National Associations will focus on athletes’ pathways. Participants will look at best practise on how to develop talent and, at the same time, promote education for life after the sporting career.

To find out about everything that will be going on during the Hockey Revolution Part 2 Conference and 45th FIH Congress, visit the programme page of the official website by clicking here.