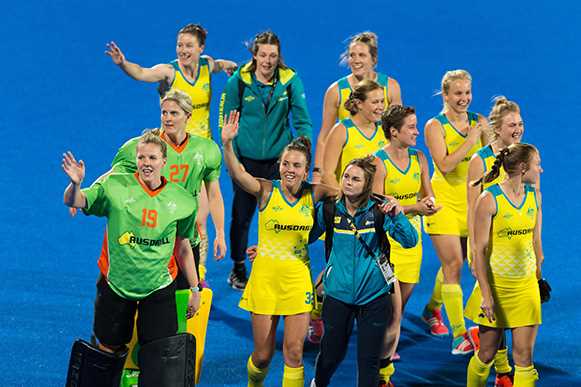 Hockeyroos aim to end year on a winning note

Australia women have a proud tradition at the Hockey Champions Trophy. In 23 editions of the competition, they have only missed participating in two events – 2010 and 2012 – and they have won the title six times. The last of those gold medals came in 2003 and, since then, the Hockeyroos have had to settle for just three silver medals. The lack of gold medals at the Champions Trophy in recent times is something that Paul Gaudoin and his squad would dearly like to change in Changzhou.

The Hockeyroos are a team that is aspiring to renewed greatness. They were the team that came the closest to dismantling the Netherlands’ World Cup ambitions in London earlier this year, when they held the world number one side to a draw in regulation time and narrowly lost out on shoot-out. Now they are targeting Tokyo 2020, but the forthcoming Wanglibao Hockey Champions Trophy is pivotal to their plans.

"We want to be able to look back in a couple of years’ time and say, yes that was really special for everyone.” Karri McMahon, Australia

Defender Karri McMahon spoke to FIH about her team’s approach to the Hockey Champions Trophy. “For us, the Champions Trophy offers up a chance to play against some of the best competition in the world and it is a really prestigious event to be a part of.

“So it is really important, particularly given the challenges of the FIH Pro League next year. It is important for us to have a good finish to the year to set us up for a good start to 2019.”

Billed as the last Hockey Champions Trophy, the event has taken on a special significance to the players as McMahon explains: “You always want to have your name on the trophy, particularly if it is to be the last name on that trophy. I think all the teams will be really fighting for that honour.”

The event in China will be McMahon’s third Champions Trophy experience but etched in her memory is the 2014 event where Australia played Argentina in the final. The competition was played in Mendoza, and Australia walked out onto the pitch to be greeted by a wall of noise.

“For me, playing Argentina in Mendoza in the final was one of the most enjoyable experiences I have had in my playing career,” says McMahon. “It is right up there with the 2014 World Cup final [where Australia lost 2-0 to the Netherlands]. Playing in front of that phenomenal home crowd, the event really has a special place in my heart. It was as if they had magnified the crowd, they were making so much noise.”

Australia lost the final on shoot-out and McMahon was one of the players whose attempt was saved by Argentina’s goalkeeper Belen Succi. But anyone who was at the stadium will remember the final as a great match that was also the swan song of Argentina’s superstar, Luciana Aymar.

McMahon is hoping that equally evocative memories and moments will be created in Changzhou. “The Champions Trophy will be about putting on performances that we are proud of. We want to be able to look back in a couple of years’ time and say, yes that was really special for everyone.”

The Australia squad that will travel to China has some debutants on board, and McMahon says there is a huge enthusiasm within the squad to push on and challenge for medals. The players have all been involved recently with their clubs in the Australian Hockey League but now they will come together for final preparations for the Hockey Champions Trophy.

That involves getting the entire team fit and healthy so they deal easily with different climate and unfamiliar food. A crate is being put together that contains foods the players are used to and no stone is left unturned as the backroom staff make sure that everything is in place to keep all the squad fit for the challenge of six intensive days of hockey.

“We are excited about the challenges that lie ahead,” says McMahon, “and we are definitely in contention for gold in Changzhou.”