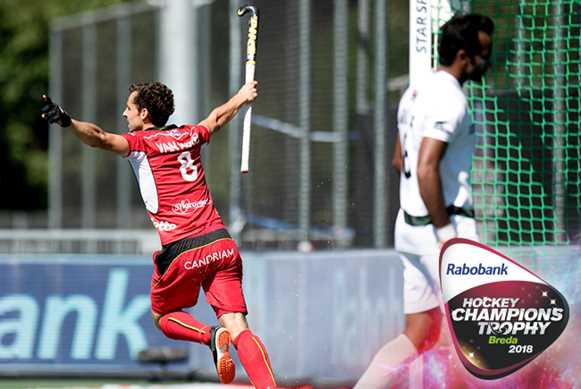 Belgium boosted their hopes of claiming a bronze medal at the Men’s Rabobank Hockey Champions Trophy 2018 thanks to an important victory over Pakistan on Day 6 of the event currently taking place in Breda, the Netherlands.

The 4-2 triumph for the Red Lions moved them into fourth place, a result that could be good enough for a place in Sunday’s bronze medal match. However, they will need to wait until the results of the two remaining pool phase matches, which take place on Saturday 29 June. The key fixture for the Belgians will be the meeting between fifth-placed Argentina and reigning world champions Australia, with Los Leones needing victory against the team that sits top of the stangings if they are to replace the Belgians in the bronze medal game.

Both Pakistan (FIH Hero World Ranking: 13) and Belgium (WR:3) came into Friday’s contest occupying the bottom two positions in the pool and knew that a victory to either side would keep alive hopes of a medal in Breda. However, following their impressive 4-1 triumph over Olympic champions Argentina on Thursday, the Red Lions faced a Pakistan team riding high on a wave on confidence and the Asian giants were certainly the better team in the opening quarter.

The Greenshirts took a deserved lead in the 11th minute when Aleem Bilal sent a penalty corner rocket just inside the post, raising the prospect of Pakistan defeating both the Rio 2016 Olympic gold and silver medallists in consecutive days. Although Belgium improved in the second quarter - Loick Luypaert was off target with a couple of penalty corners - it was a lead that Pakistan took into half time.

The Red Lions continued to grow into the game and eventually were rewarded for their hard work when team captain Thomas Briels equalised, brilliantly evading Pakistan goalkeeper Imran Butt with a wonderful piece of skill before forcing home from close range. Remarkably, Pakistan and Belgium traded blows to take the score to 2-2, with Aleem scoring another superb penalty corner effort and Belgium’s Amaury Keusters tapped home seconds later to restore parity ahead of the final quarter.

Belgium dominated the final period of the game and took the lead for the first time thanks to Cedric Charlier, who was on hand to tap in from close range following a failed penalty corner routine. The win was confirmed by Florent van Aubel’s 54th minute field goal, with Tom Boon earning great credit as the creator of the decisive strike.

“We are really happy with the performance, maybe not the level but the character and desire we showed”, said Belgium goalscorer Cedric Charlier after the match. “It is a tournament in which we have not showed our best form, so we have had to find other ways in which to win games. Mentally it was really tough to stay in the game, but at the end we tried to do the little things well and that is what gave us the win today.”

It was a milestone day for Pakistan’s Toseeq Arshad, who made his 100th senior international appearance for the Greenshirts.

The Men’s Rabobank Hockey Champions Trophy 2018 continues on Saturday 30th June when the final two matches of the pool phase take place. Argentina’s meeting against Australia gets underway at 14:00 Central European Standard Time (UTC +1), with second-placed India and third-placed Netherlands going head-to-head for a place in the competition final against reigning champions Australia at 16:00.

A number of spectator tickets are still available for the remaining competition days. For more information, please click here.