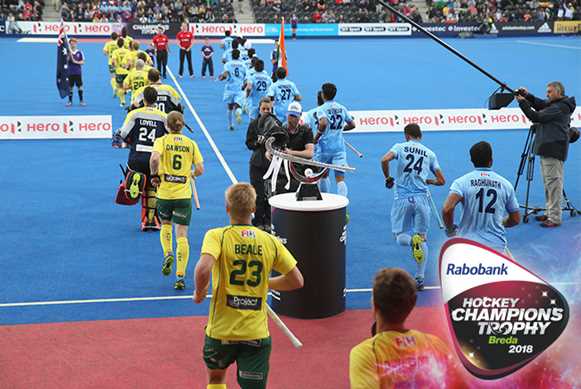 The 37th edition of the prestigious men’s Champions Trophy is set to be a sensational event of top class international hockey.

The qualification criteria set out by the International Hockey Federation (FIH) in July 2015 stated that the line-up for the event would consist of the nations that held the Olympic, World Cup, Hockey World League and Champions Trophy titles, who would join host nation the Netherlands alongside one nation nominated by the FIH Executive Board.

With Australia’s Kookaburras being the holders of the respective World Cup, Hockey World League and Champions Trophy title, this meant that the number of nations nominated by FIH Executive Board rose from one to three.

With five of the top six placed nations in the FIH Hero World Rankings taking to the field in a country renowned for its passion for hockey, the men’s Champions Trophy is all set to be another cracking chapter in an event with a wonderful history.

Before the action begins on Saturday 23 June 2018, we take a brief look at the history of the nations that will compete in Breda.

The Netherlands (FIH Hero World Ranking: 4) qualified as the host nation of the competition and will be looking to make home advantage count at De Bredase Hockey and Bandy Club. Oranje have a wonderful record in the Champions Trophy, having claimed eight titles between 1981 and 2006. In addition to their eight triumphs, the reigning European champions have also finished on the podium a further 14 times, with six silver medals and eight bronze. Their most recent medal arrived at the 2011 event in Melbourne, where they took silver behind host nation Australia. The Dutch have a fine Champions Trophy record on home soil, having won the title at the 1982, 2000 and 2003 events, which all took place in Amstelveen.

Argentina (FIH Hero World Ranking 2) come into the event as the reigning Olympic champions, following their stunning gold medal win at Rio 2016, which earned them the right to compete in this edition of the men’s Champions Trophy. They are current Pan American champions and also enjoyed a wonderful World Cup event on Dutch soil four years ago in The Hague, where they claimed the bronze medal. That could be a good omen for potential success in Breda, where they must surely be seen as serious contenders for the title. This is Argentina’s sixth appearance in the Champions Trophy, having featured in the 1987, 2003, 2006, 2008 and 2014 events. Their best display to date came at the 2008 competition in Rotterdam, where they took the bronze medal by beating host nation Netherlands on penalty strokes.

As the title holders of the Champions Trophy, World Cup and Hockey World League, Australia (FIH Hero World Ranking: 1) actually qualified for this event three times over. They have a peerless record in the Champions Trophy, having won the event a record 14 times, four clear of nearest rivals Germany. The Kookaburras won five successive titles between 2008 and 2012 and have also claimed a monumental haul of other medals too, with ten silver and four bronze. With a quite remarkable 28 podium finishes from 35 Champions Trophy appearances, they will enter this competition knowing that a 15th title is very much within their capabilities.

Having competed in only three Champions Trophy competitions (2012, 2014, 2016), Belgium (FIH Hero World Ranking: 3) may not have the same level of history as the other nations taking part in Breda. However, they are unquestionably one of the finest teams in the world and will be setting their sights very much on the title. A silver medal at the Rio 2016 Olympic Games remains the high point for the Red Lions, who also took the runners-up positions at both the 2017 European championships in Amstelveen and the Hockey World League in 2015. A gold medal here in Breda could be a breakthrough moment for an extraordinarily talented group of players.

Asian champions India (FIH Hero World Ranking: 6) will also feel that they have a fantastic chance of challenging for the Champions Trophy, a title which, quite remarkably, they have never won. They came agonisingly close at the 2016 event in London, finishing runners up behind Australia thanks to an agonising shoot-out defeat. This could be their year.

2014 silver medallists Pakistan (FIH Hero World Ranking: 13) may have finished in seventh place at the XXI Commonwealth Games on Australia’s Gold Coast earlier this year, but that result hides the fact that they went through the event completely unbeaten. Four draws in the pool phase – against Wales, India, England and Malaysia respectively - saw Pakistan finish fourth in their five-team pool, putting them in the 7-8 classification match where they defeated Canada 3-1. The founding nation of the Champions Trophy will be determined to add to the titles that they claimed in 1978, 1980 and 1994 – victories that all came on home soil.

The combination of outstanding teams and an event taking place in one of the world’s most fanatical hockey countries, there can be no doubt that the Rabobank Men’s Hockey Champions Trophy promises to be a spectacular edition in Breda. For a full schedule and all the tournament details click here.