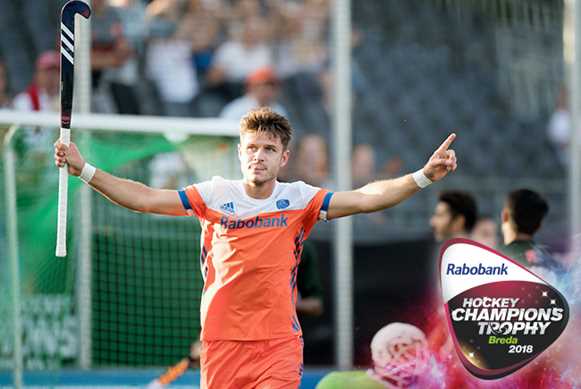 On Day 3 of the Men’s Rabobank Hockey Champions Trophy 2018, host nation the Netherlands put themselves back in title contention with an important win against Pakistan, while Argentina and Belgium - gold and silver medallists at the Rio 2016 Olympic Games, respectively - could not be separated on another fine day of action in Breda.

With both teams having suffered defeats on Sunday - Argentina (FIH Hero World Ranking: 2) were beaten by India and Belgium (WR: 3) were overpowered by the Netherlands - the rematch of the gold medal game at the Rio 2016 Olympic Games was an opportunity for Los Leones and the Red Lions to get things back on track. The final score of 1-1, with Gonzalo Peillat’s early penalty corner drag flick for Argentina being cancelled out seven minutes after half time by Amaury Keusters, was a decent outcome for the South Americans, moving them onto four points and keeping them within touching distance of the required top two finish in order to reach the competition final. However, the result all but ended Belgium’s hopes of a first ever Champions Trophy title, leaving them fifth in the table with two points from their three matches.

“I think it was a really good game for us”, said Argentina attacker Lucas Vila in the post match interview. “We didn’t play a good match against India two days ago, so today our main objective was to play better. I think we did it, played with much more confidence. Maybe we deserved a little more, but we didn't win enough penalty corners for Gonzalo (Peillat). I think it was a good point and if we win our last two pool matches (against Pakistan and Australia) we should be fighting for the trophy.”

Home favourites the Netherlands (WR:4) continued their resurgence in the competition by claiming a second successive victory, following up Sunday’s 6-1 triumph over Belgium with a comfortable 4-0 win against Pakistan (WR:13). The result put the Dutch top of the standings, above India on goal difference but having played a game more. Oranje scored two goals in the both the second and fourth quarters, with Robbert Kemperman and Valentin Verga giving the Dutch a 2-0 advantage ahead of half time before Thijs van Dam and Mirco Pruijser completed proceedings.

Speaking after the match, Robbert Kemperman expressed his pleasure about the way his team have bounced back from their opening day defeat against Argentina to record convincing victories against Belgium and Pakistan. “We had a difficult start but we have recovered well and should be pleased. We want to make the final but it is going to be difficult. We play Australia and India and they are both very good teams so we will see what happens.”

Away from the Champions Trophy, four teams that will take part in next month’s Vitality Women’s Hockey World Cup London 2018 were also in action on Tuesday, as the Rabobank 4-Nations Women’s 2018 competition got underway in Breda. Japan (FIH Hero World Ranking: 12)  claimed a 3-1 victory over Asian continental rivals China (WR:8), with Aki Yamada, Kana Nomura and Motomi Kawamura on target for the Cherry Blossoms. Hosts the Netherlands (WR:1) were also winners on the opening day of that competition, defeating Spain’s Red Sticks (WR:11) 2-0 thanks to field goals from Kitty van Male and Frederique Matla.

The Men’s Rabobank Hockey Champions Trophy 2018 continues on Wednesday 27th June 2018 with only one match, although the outcome of the contest could prove significant in the race for a top two finish and the place in the competition final that comes with it. Table-toppers India take on the unbeaten Australia at 15:00 Central European Standard Time (UTC+1), with the winner putting themselves in with a real chance of featuring in the title match. The day will also feature two matches in the Rabobank 4-Nations Women 2018 event, with Spain facing Japan at 17:00 before the Netherlands and China take to the field at 19:30.

A number of spectator tickets are still available for the five remaining competition days. For more information, please click here.