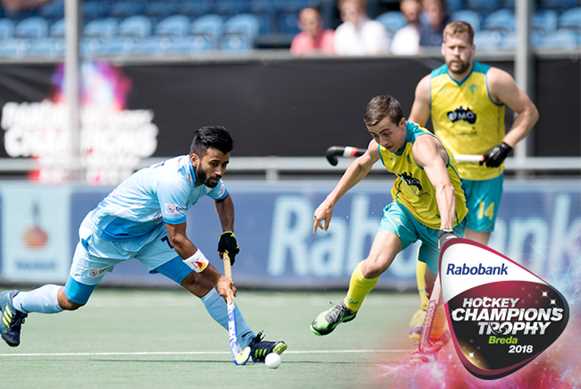 Australia ended Day 4 at the top of the standings thanks to victory over India. Copyright: FIH / World Sport Pics

Title holders Australia (FIH Hero World Ranking: 1) have moved to the top of the standings at the Men’s Rabobank Hockey Champions Trophy 2018 thanks to a narrow 3-2 victory against Asian champions India (WR:6) on the fourth day of action in Breda.

The win saw the Kookaburras jump from third to first in the pool standings, leaping ahead of host nation the Netherlands, who now sit second ahead of third placed India on goal difference. A top two finish is required to secure a place in Sunday’s title match, with two rounds of matches left to play.

Australia made a superb start to the contest, taking a 1-0 lead thanks to a close range tap-in from outstanding youngster Lachlan Sharp following a wonderful run and cross from Aussie co-captain Eddie Ockenden just six minutes into the match. The Kookaburras lead was short-lived, with Varun Kumar flicking home from open play before Tom Craig’s scrappy finish gave the world champions a 2-1 score-line to take into the second quarter.

A rasping penalty corner drag-flick from Jeremy Hayward rattled the frame of PR Sreejesh’s goal midway through the second period, with Sreejesh also producing a wonderful stick save from another Hayward set piece as India tried to contain an Australia team that were threatening to take control of the contest. The champions of Asia had chances of their own, but failed to make the most of the opportunities, particularly from penalty corners.

The Oceania champions were outstanding in the third quarter, with Trent Mitton claiming his third goal of the competition by glancing home early in the period after a fine run and pass from Craig. India shot-stopper Sreejesh was called into action on numerous occasions, pulling off some world class saves to keep his team in the contest going into the final 15 minutes of the match.

India threw everything at Australia in the dying stages of the match, replacing Sreejesh with an outfield player in a bid to rescue a point from the contest. It was a move that paid off almost immediately, with Harmanpreet Singh slamming home a penalty corner to give India a lifeline two minutes from time. A last minute penalty corner proved to be India’s final opportunity, with Harmanpreet seeing his powerful flick brilliantly charged down by Jeremy Hayward to seal victory for Australia.

“As usual it was tough against India, they are very quick and super skilful”, said Australia’s Jeremy Edwards after the match. “We got a bit further ahead just after half time but we couldn’t quite put them away and they came on really strong towards the end. They really made us work. Great credit to Jez Hayward towards the end for charging down the penalty corner - it was a huge part of the win. In a tournament like this where every game is so vital, a draw in that match would have really opened things up so the win really helps us.”

The Men’s Rabobank Hockey Champions Trophy 2018 continues on Thursday 28th June 2018 with all six competing teams in action. The day’s play begins at 15:00 Central European Standard Time (UTC +1) when reigning Olympic champions Argentina aiming to keep their title chances alive when they face bottom of the table Pakistan, before India take on Olympic and European silver medallists Belgium, a team still searching for their first victory of the competition, at 17:00. The day’s play will conclude at 19:30 with a re-match of the 2014 World Cup final, with reigning world champions Australia playing European champions the Netherlands in what has the potential to be one of the games of the competition.

A number of spectator tickets are still available for the five remaining competition days. For more information, please click here.