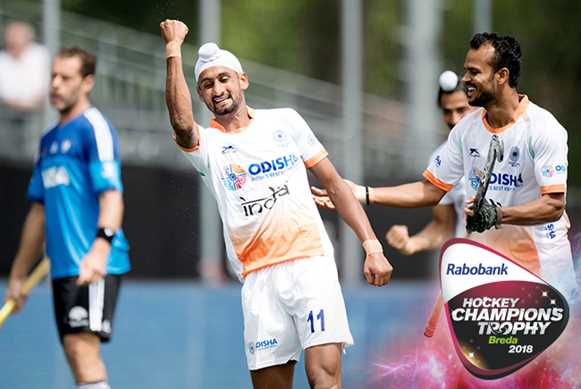 India topped the table at the end of Day 2 in Breda. Copyright: FIH / World Sport Pics

Asian continental champions India ended the second day of action at the Men’s Rabobank Hockey Champions Trophy 2018 sitting at the top of the table thanks to a fine win against Olympic champions Argentina in Breda, Netherlands. Australia finished the day in second place courtesy of a victory against Pakistan, while home favourites the Netherlands were in scintillating form by overpowering Belgium.

India (FIH Hero World Ranking: 6) were triumphant in the opening match of the day, claiming a 2-1 victory against Olympic champions Argentina (WR:2) on the occasion of Sardar Singh’s 300th international appearance. It was India’s second successive win of the competition, following their 4-0 victory over Pakistan on Saturday. All of the goals came in the second quarter of the match, with Harmanpreet Singh opening the scoring with a powerful low penalty corner effort before Mandeep Singh doubled the advantage with a close range finish after excellent se-up play from teenager Dilpreet Singh. A ferocious penalty corner drag-flick from Gonzalo Peillat dragged Los Leones back into the contest ahead of the break but, despite excellent chances for both sides after half time, the score remained unchanged.

Speaking after the match, triple caps centurion Sardar Singh said: “It is a great honour for me to have played 300 matches for my country. In the team meeting the players said that they would win for me, and they did it. I have to thank my team mates for that.”

A huge home crowd were given a superb show in the day’s second match, with the Netherlands (WR:4) producing a spellbinding performance to defeat neighbours Belgium (WR:3) 6-1. The Red Lions hit the post in the opening minute before the Dutch ran riot, scoring three times between the fourth and sixth minutes through Seve van As and Roel Bovendeert (2). Strikes from Jeroen Hertzberger and Mirco Pruijser took the score to 5-0 at half time, with Belgium reducing the deficit thanks to John-John Dohmen after the break. Herzberger, playing his first major international competition since Rio 2016, claimed his second and the Netherlands’ sixth goal from the penalty spot to complete a stunning final score for the hosts.

“That was so much fun, I really enjoyed that”, said Jeroen Hertzberger after the match. “I think that first half was probably the best half of hockey I have ever played in. I had a smile on my face all the way though.”

Australia (WR:1) added to their opening day draw against Belgium with a narrow 2-1 win over Pakistan (WR:13) in the final match of the day. An open play strike from Ajaz Ahmad put the Green Shirts in front early in the second quarter, but parity was restored when Jake Whetton fired home five minutes before half time. The winning goal arrived four minutes from the end, with Blake Govers touching home from close range to put the the Kookaburras second in the table after two rounds of matches.

“All the games in the Champions Trophy are pretty tough battles, I think we expected that against Pakistan”, said Australia co-captain Eddie Ockenden at the conclusion of the contest. “We have seen their recent results and obviously the way they played against India yesterday, they are a really good team and it is great to play against them. It was really important to get the three points.”