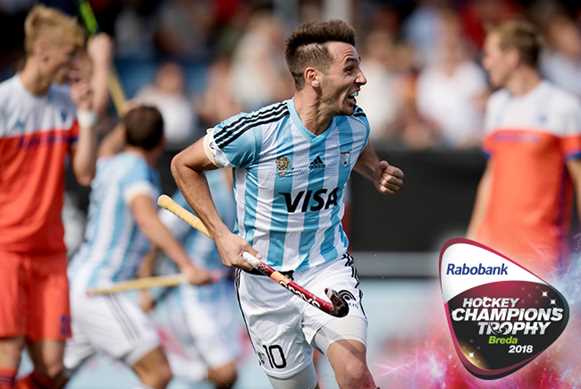 Argentina's Matias Paredes hit a late winner to give Los Leones a victory over hosts the Netherlands on Day 1 in Breda. Copyright: FIH / World Sport Pics

Asian continental champions India and Rio 2016 Olympic gold medallists Argentina both made excellent starts to their respective campaigns at the Men’s Rabobank Hockey Champions Trophy 2018, claiming crucial early victories against Pakistan and Netherlands on the opening day of competition in Breda. Australia and Belgium were also in action, contesting a thrilling 3-3 draw in the final match of the day.

The competition started with the ever-intriguing meeting between Asian rivals India (FIH Hero World Ranking: 6) and Pakistan (WR:13), with India taking all three points with a 4-0 victory. All of the goals came from open play, with Birendra Lakra putting India in front four minutes ahead of half time before Dilpreet Singh doubled the advantage by wrong footing the goalkeeper and firing into an unguarded net with six minutes of the match remaining. In an effort to chase the game, Pakistan replaced goalkeeper Imran Butt with an outfield player, but it was the Indians who benefitted from the switch as Mandeep Singh - who netted the 3000th goal in men’s Champions Trophy history - and Lalit Upadhyay completed the scoring.

“We are really happy to get the three points today as the first match is always so important”, said India captain and goalkeeper PR Sreejesh after the contest. “It is always incredible when we play against Pakistan and it is hard not to enjoy the game. If you look at the history of the Champions Trophy we have never won this prize, so our aim is to create history here.”

The second match of the day saw host nation European champions the Netherlands (WR:4) up against the Olympic and Pan American champions Argentina (WR:2). It was Los Leones who emerged triumphant, claiming a 2-1 victory thanks to a late strike from Matias Paredes, who forced home from close range with 45 seconds left on the clock. A field goal from Mirco Pruijser gave the home favourites the lead in the 14th minute, with Argentina’s penalty corner master Gonzalo Peillat restoring parity with a blistering flick into the roof of the net four minutes after half time ahead before Paredes’ late winner.

Argentina’s Pedro Ibarra said: “I think we played a good game but it was difficult, especially being the first game of the tournament as we were a little bit nervous. It is good to get a victory against Holland in Holland, it is a really good start for us.”

The Australia (WR:1) versus Belgium (WR:3) contest was a milestone match for Red Lions captain Thomas Briels, who marked his 300th senior international appearance and by creating the opening goal of the game. Briels' cross into the circle from the right was not effectively cleared by Australia, with Cedric Charlier pouncing from close range to give the Red Lions the early advantage of the 14-time Champions Trophy winners. However, the Kookaburras soon showed why they are the top ranked team in the game by scoring twice in two minutes, as open play strikes from Trent Mitton and Lachlan Sharp turned the match on its head. The momentum shifted back Belgium’s way when they took a 3-2 lead thanks to field goals from Arthur de Sloover and Tom Boon, but a low penalty corner drag flick from Australia’s Jeremy Hayward ten minutes from the end made it 3-3 and ensured that the points were shared.

"I thought it was a really good game, a high level game and it could have gone either way”, said Belgium captain Briels after the match. “I think we were the better team in the third quarter and could maybe have scored more goals, but I think both teams were quite lucky to get away with a draw.”

On making his landmark 300th appearance, Briels said: “It has been 11 years and I haven’t really been counting, and the years have gone past very fast. I’m very proud and always happy to play for Belgium. We have a great team and we hope to bring home a trophy.”