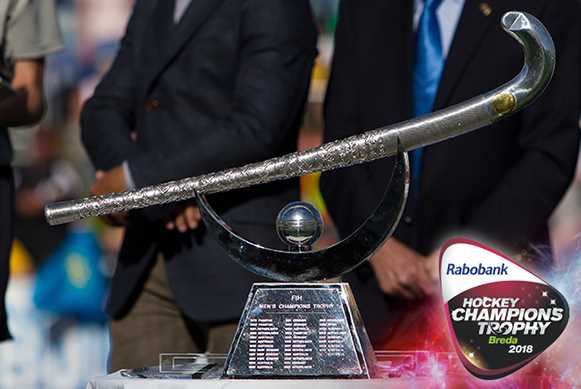 A Brief History of the Men’s Hockey Champions Trophy

With the city of Breda all set to host the Rabobank Hockey Champions Trophy later this month, we take a look back at the proud history of an event that has long showcased the very best that hockey has to offer.

Due to the introduction of FIH’s ground-breaking, game-changing new event portfolio, the Men’s Rabobank Hockey Champions Trophy 2018 in Breda will be the 37th edition of this revered competition. All of the competing teams - Australia (FIH Hero World Ranking: 1), Argentina (WR: 2), Belgium (WR 3), Netherlands (WR 4), India (WR 6) and Pakistan (WR 13) - will be firmly focused on joining the elite group of previous Hockey Champions Trophy winners. All six nations will be equally determined to etch their name on this unique Trophy and into the history books for eternity.

During the Hockey World Cup in 1978 in Buenos Aires, Argentina, Nur Khan offered the FIH the chance to stage a 'Super World Cup tournament' in Pakistan, where the best nations in the world would participate. At the time, the selection of the teams had to be based on the most recent FIH World Ranking, according to the Olympic Games and the World Cup.

Former FIH President René Frank, from Belgium, took Khan’s idea to the FIH Executive Board and they agreed that the tournament would start later that year, in 1978.

The PHF, taking the initiative of this ‘Super World Cup tournament’ (shortly thereafter the name was changed to Champions Trophy), obtained the right to organise the first edition.

The inaugural tournament took place in the city of Lahore, Pakistan in November 1978 and featured five teams – Pakistan, Australia, Great Britain, New Zealand and Spain, with Pakistan winning the title on home soil.

Following a two-year gap between the first (1978) and second (1980) editions of the Hockey Champions Trophy, the competition was played on an annual basis until 2012. The Champions Trophy reverted to a biennial event in 2014.

Australia are the most successful nation in men’s Hockey Champions Trophy history, having won the gold medal on 14 separate occasions, four more than nearest rivals Germany. With the Kookaburras sitting at the top of the FIH Hero World Rankings, they will fancy their chances of claiming a 15th title at this edition of this iconic competition.

The fine heritage of the Champions Trophy is reflected in the opening match of the 2018 competition, which features one of the biggest rivalries in the sport - Pakistan going head-to-head with India on Saturday 23 June at 14:30 local time (Central European Standard Time).

The meeting between Pakistan, the nation that launched the Hockey Champions Trophy back in 1978, and India, the eight time Olympic champions, is a fixture that is sure to draw thousands of spectators to the venue as well as millions of fans tuning in from across the world, eagerly anticipating the latest episode of this long-running battle between two of the sport’s most successful nations.

The opening day drama does not stop there, being followed at 16:00 by another eye-catching fixture, with home favourites and European champions Netherlands taking on Olympic and Pan American champions Argentina. A sensational first day of action is rounded off by the meeting between reigning champions Australia and Olympic silver medallists Belgium, who meet at 18:00 in what is certain to be a hugely competitive fixture between two of the best attacking sides in the world.

The combination of outstanding teams and an event taking place in one of the world’s most fanatical hockey countries, there can be no doubt that the Rabobank Men’s Hockey Champions Trophy promises to be a spectacular edition in Breda. For a full schedule and all the tournament details click here.