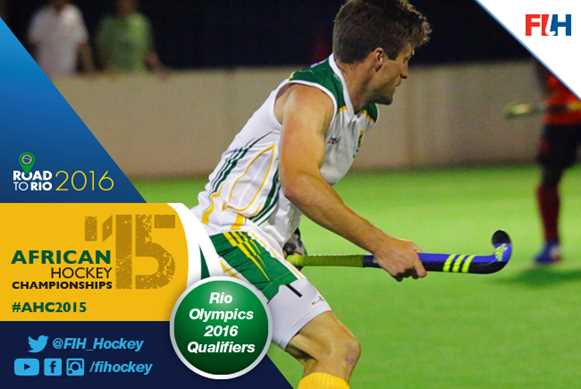 A hat trick for Matthew Guise-Brown could not have come at a better time for the reigning African champions as South Africa men made it double delight when they joined the women’s team as winners of the Greenfields African Hockey Championships 2015.

“This is something we will cherish,” said captain Tim Drummond, after his team defeated Egypt in a thrilling final to the 2015 continental championships.

It was high drama all the way to the final whistle as the reigning champions and Egypt battled for supremacy in a tense and dramatic match, with the winning goals only coming in the final two minutes of the game.

Egypt took the lead in the 35th minute through Houssam Ghobran. Until then, the encounter had been an evenly-matched game with neither side able to break through.

The next 10 minutes were tight, with every ball hotly pursued. Egypt were able to deny South Africa the equaliser, despite the world's 15th ranked team coming close on a number of occasions.

The equaliser when it came was the first of three goals scored within a two-minute period. First, Matthew Guise-Brown sent his drag-flick flashing into the net, then Egypt went 2-1 up in the 47th minute when captain Amr Elhady set up Ahmed Elnaggar to make it 2-1.

South Africa hit back from the re-start with another Guise-Brown penalty corner strike and the teams were level at 2-2 after 48 minutes.

The next 10 minutes continued at the same frantic pace, but it was South Africa who made the breakthrough. Julian Hykes won a penalty corner in the 58th minute, and Guise-Brown scored his hat-trick – and his place at the top of the goal-scorer’s table – with a brilliant, fast paced flick.

With 38 seconds left, the inspirational Hykes made a defence-splitting pass and Lloyd Norris-Jones delivered a classic dive-and-slide goal for the 4-2 final score.

“Oh man,” said a visibly emotional coach Fabian Gregory. “I am very emotional and so, so very happy for these boys. They have put so much into it. Whatever happens happens, but we are continental champions.”

In the bronze medal match, fans were treated to a fabulous display of attack and counter-attack as rivals Kenya (FIH World Ranking: 39) and Ghana (World Ranking: 41) battled it out for a 4-3 win in favour of the higher-ranked Kenyan team.

Derric Kuloba opened the scoring in the 10th minute when some great build-up play created space for the midfielder to slip the ball past Eugene Acheampong in the Ghana goal. This was Acheampong’s last action of the Championship as he left the field to be replaced by Jeffery Karikari.

Ghana came straight back into the game, with Captain Salya Nsalbini leading by example. His equaliser from a penalty corner in the 17th minute brought Ghana back level.

On the verge of half-time, Kenya got their second goal, a penalty corner struck by Maxwell Wakhungu; the action also saw two Ghana players yellow carded. Despite being down to eight field players, Ghana held on until half-time with no further score.

Four minutes into the second half however, and still with a two-man advanatge, Kenya extended their lead to 3-1 with a well-taken goal from Leon Magomere.

As the action flew from end-to-end, Ghana were still very much in the game and they came back to 3-2 when Michael Baiden scored from open play.

However, Kenya restored the cushion just one minute later through some great work by George Mutria and, despite one more goal from Benedict Sam in the 50th minute, Kenya were able to shut up shop and hold onto the lead through the last 10 tense minutes.

The third game in the men’s competition was a one-sided match between unranked Namibia and Tanzania (World Ranking 73). The Namibians ran out 10-0 winners despite playing much of the last third of the match with only nine field players.

Wayne Jeffery started the goal rush with a goal in the 15th minute, then four goals in the second quarter from Lenard Fick, Ernest Jacobs, Siyabonga Martins and Riaan Kruger ended hopes Tanzania had for a first victory in this tournament.

More misery was heaped on Nick Isbouts’ team in the second half as Martins got his second, Heinrich Swartbooi joined the scoring with a well-taken goal from open play and Captain Brynn Cleak added to the scoreline to make it 8-0.

The final 15 minutes was still one-way traffic leaving Russel Bartlett and Jacobs able to take advantage of some very tired Tanzanian defenders to make it 10-0.